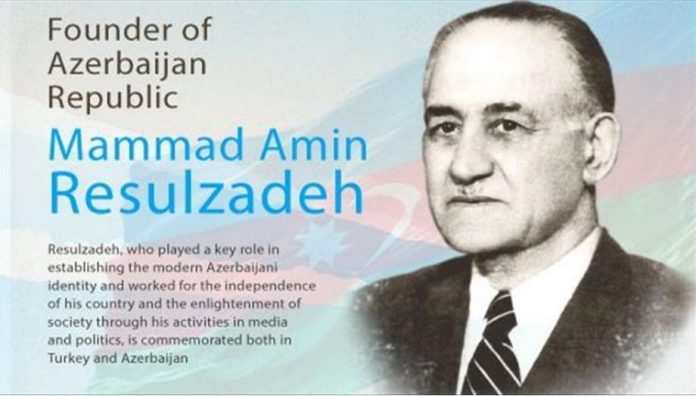 BAKU, JAN 31 – Mammad Amin Resulzadeh, the founder of Azerbaijan, one of the first democratic republics in the Muslim world, is being commemorated on his 137th birth anniversary.

Having played a significant role in the formation of the modern Azerbaijani national identity, Resulzadeh struggled for his country’s independence, people’s rights and enlightenment of the society through his press and political activities.

Besides Azerbaijan, he is also remembered in Turkey where he spent some years of his life.

Resulzadeh’s expression “Once raised, the flag never falls!” became the motto of the independence movement in Azerbaijan in the 20th century.

The first and only president of the Azerbaijan Democratic Republic was born in Novhani village, Baku in 1884. He studied at the Russian-Muslim Secondary School and then at the Baku Technical College.

Interested in politics since an early age, he struggled against Russia’s Tsarist regime politically, and also wrote in various newspapers and magazines.

In 1909, he fled to Iran due to persecution, began publishing ‘Iran-e Now’ (New Iran), a daily newspaper, and became one of the founders of the Democratic Party of Iran.

Following the Russian troops’ invasion of Iran, Resulzadeh came to Istanbul, the then capital of the Ottoman Empire.

In 1913, he went back to Baku and became a member of the Musavat (Equality) Party. He was elected as its chairman four years later.

He was unanimously elected as the head of the Azerbaijani National Council, a legislative body, in 1918.

On May 28, 1918, the Azerbaijani National Council, headed by Rasulzadeh, declared the independent Azerbaijan Democratic Republic.

The same year, the Ottomans and the newly formed Azerbaijan signed an agreement of friendship and cooperation.

When the Republic collapsed in 1920, Resulzadeh left Baku and directed resistance against Soviet Russia from the village of Lahij. The rebellion was crushed by the Soviet Russian army.

Resulzadeh was arrested and brought to Moscow. Although Joseph Stalin wanted him to collaborate with Soviet Russia, he refused the offer.

He then went on to live in different countries including France, Finland, Poland and Germany, and wrote against the Soviets for the world to know that Azerbaijan was under occupation.

In 1947, Resulzadeh settled in Turkey. He became a Turkish citizen under a Cabinet decree, and established the Azerbaijan Culture Association in 1949 in Ankara, which is still active.

He continued to write books, and held talks to convey the situation in Azerbaijan to the world.

He died on March 6, 1955 in Ankara, and was buried at the Cebeci Asri Cemetery in the Turkish capital.