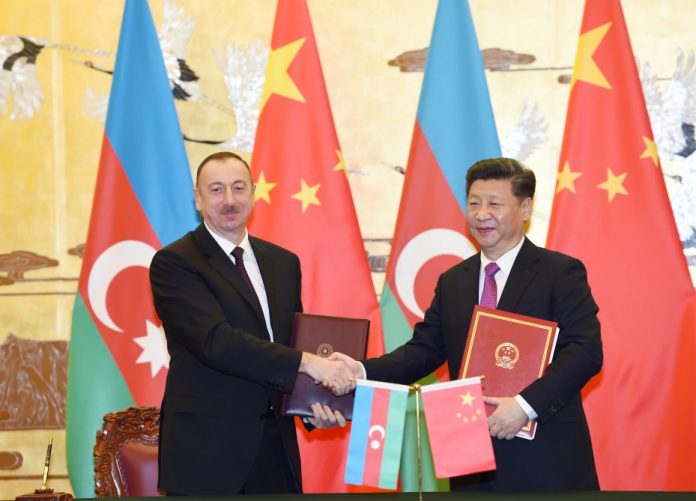 At a time when U.S. influence in the South Caucasus is declining and the European Union is not fully engaged in the region, the People’s Republic of China (PRC) has emerged as a strategically important new player in the South Caucasus, which has the potential to enhance Azerbaijan’s capacity as a regional transit hub. In particular, the Belt and Road Initiative (BRI), announced by the President of PRC Xi Jinping in 2013 in Nur-Sultan (formerly known as Astana), Kazakhstan, has aroused interest in Azerbaijan from its very beginning.

During the visit of the Azerbaijani President Ilham Aliyev to China in 2015, the two countries signed a memorandum of understanding on joint promotion of the Silk Road Economic Belt”. Since regaining its independence, Azerbaijan has been seeking to invest in infrastructure projects to take advantage of its favorable geographical position. The availability and operation of the already built infrastructure has further increased the strategic importance of Azerbaijan for the PRC. The Baku-Tbilisi-Kars Railway (BTK) and the Baku International Sea Trade Port (BSTP) play a crucial role in the plans of both Azerbaijan and China.

On October 30, 2017, Azerbaijan and Georgia, along with Turkey, officially launched the 826-kilometer Baku-Tbilisi-Kars railway. On July 24, 2019, it for the first time delivered cargo from Turkey to Georgia. The BTK has a capacity of 5 million tons of cargo per year and offers a viable alternative to other railway routes on the East-West corridor. In addition to the BTK, the “construction of the New Baku International Sea Trade Port Complex” began in the Alat settlement, 70 km south of Baku, according to a decree signed by the President of Azerbaijan on March 18, 2007. The first phase of the port has already been completed. At the initial stage, the port’s loading capacity is expected to be up to 15 million tons. Upon completion of the second phase, the loading capacity will increase to 25 million tons. The BSTP is located at the intersection of the East-West and North-South corridors, as well as key highways and railways of Azerbaijan. The adoption of the law on the establishment of the Alat Free Economic Zone increases the importance of the port and attracts the attention of both regional and non-regional countries.

Azerbaijan is located within the Middle Corridor of the Silk Road Economic Belt. Covering 4,256 km of railways and 508 km of sea routes, this corridor stretches from the Chinese-Kazakh border to Azerbaijan (via the Caspian Sea), Georgia and Turkey. The location of both the BTK and the BSTP in the central corridor turns Azerbaijan into a key country in terms of realizing and reaching full potential of the BRI.

The Middle Corridor is shorter and more cost-effective than other alternatives. Goods shipped from China by sea take 36 days to reach Europe, while shipping along the Trans-Siberian route takes 20 days. The Middle Corridor, however, offers a timespan of 12 days for the Chinese goods to reach the same destination. In addition to being economically attractive, the Middle Corridor is also more politically viable for China, as the countries along this corridor are more secure, both geographically and due to stable relations with other countries. In addition, the corridor allows China to diversify its exports, reduce its dependence on Russia, a major player in the Northern Corridor, and safely ship its products to Europe without using the Southern Corridor through U.S.-sanctioned Iran.

From Azerbaijan’s point of view, the Middle Corridor strengthens the country’s position as a regional transit center and contributes to the further deepening of the Azerbaijan-Georgia-Turkey strategic triangle. Baku’s decisive role in this corridor increases Azerbaijan’s strategic importance not only for China, but also for European and regional countries. A greater role in the East-West corridor increases the country’s attractiveness along the North-South corridor and encourages countries in the neighborhood, especially Iran and Russia, to deepen cooperation with Azerbaijan. Moreover, the Middle Corridor may help Azerbaijan to diversify the national economy and reduce dependence on oil. The development of the Azerbaijani-Chinese relations may also attract more Chinese investment and increase the region`s potential to become a transport hub by developing the business environment and making it an integral part of the country’s international supply network. Politically, China’s growing influence in the region could help balance Russia and increase Azerbaijan’s maneuverability in the political arena and develop relations with international organizations in which China has a leading role (e.g.: Asian Infrastructure Investment Bank).

With the outbreak of the COVID-19 in China and its rapid spread to other regions, international trade has stagnated. During the pandemic, air and sea routes lost their functionality as a result of restrictive measures of many countries to prevent the spread of the virus. The closure of air and maritime routes due to the pandemic is having a serious impact on multiple industries. Experts predict that many European ports are going to be running only at 20-30% of their capacity in the coming months. At this time, elevated air shipping prices and longer transit times in both air and ocean freight means that the railways connecting Europe and China, remain the only reliable means of transportation for companies.

On April 19, a 940-meter freight train (the longest to have ever operated on the BTK) carrying 82 containers was sent from Turkey to Uzbekistan via Azerbaijan, Kazakhstan and Turkmenistan along the Middle Corridor. During the pandemic, a container transfer system was installed at the Canbaz station on the Turkish side of the Turkey-Georgia border to increase the capacity of the railway line to 3,500 tons due to the growing demand for freight on the BTK railway. The increase of the BTK`s freight capacity and the growing demand for freight along this route may further increase the strategic importance of Azerbaijan within the BRI framework. This situation can continue in the post-pandemic period and increase Azerbaijan’s geopolitical and geostrategic value for China. This is also a promising perspective for Azerbaijan against the backdrop of the sharp drop in oil prices and the pandemic-related burden on the national economy.

The Middle Corridor seems to dispose of an enormous potential to become the safest and shortest trade route between Europe and Asia, with Azerbaijan playing a key role in this initiative. Given the rapid development of the Azerbaijani-Chinese relations since 2015, the sharp drop in oil prices and the growing pressure on the Azerbaijani economy due to the pandemic, as well as the increasing strategic importance of railways, Azerbaijani-Chinese relations may receive a further impetus. Chinese investment in Azerbaijan would also be necessary for reviving the post-pandemic economy and more active participation of Azerbaijan in the BRI. Moreover, the deepening of relations can contribute to the development of Azerbaijan as a regional transport hub, as well as China’s diversification of export routes, reduction of transport costs and delivery of goods to Europe along the shortest route.

Yunis Sharifli is an intern at Topchubashov Center, Baku-based think tank. He studies at the Azerbaijan State University of Economics, Faculty of Turkish World Economics, majoring in International Relations. His areas of expertise cover Central Asia and Caucasus in China`s foreign policy, as well as Belt and Road Initiative.