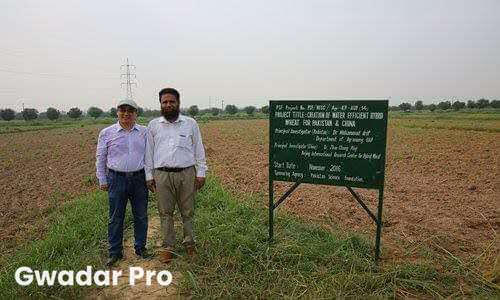 Wheat is the most important grain crop for Pakistan, its cultivated acreage is about 21.42 million acres and accounts for 44% of the country’s total arable land, says a report published by Gwadar Pro on Monday.

According to Dr. Zhang Shengquan, an expert of Beijing Academy of Agriculture and Forestry Sciences, Beijing hybrid wheat is an efficient solution to Pakistan’s wheat shortage.

Beijing hybrid wheat has outstanding drought resistance and barren tolerance, which is exactly suitable for the soil and climate in Pakistan.

Dr. Zhang said, “In addition, Beijing hybrid wheat is tenacious enough to have a good harvest even under a loose management with low input.”

Through a long-term research and experiment, over 120 hybridized combinations and more than 230 pilot projects, comparing with domestic breed, Beijing hybrid wheat has created a 24.4% average increase of yield.

Dr. Arif, the expert of The University of Agriculture Peshawar, said that importing Beijing hybrid wheat can economize vast cropland for other agricultural products. “It’s very necessary and meaningful for food security in the nation,” he said.

According to the global Food Crisis Report 2020 jointly released by the Food and Agriculture Organization (FAO) and the World Food Program (WFP), drought conditions and locust plague have caused severe food shortages in Pakistan.

In response, Dr. Zhang said, “In order to support Pakistan to overcome the food crisis, we will accelerate promoting Beijing hybrid wheat in the nation. The cooperation on agriculture is a considerable part under CPEC project, ” the report added.