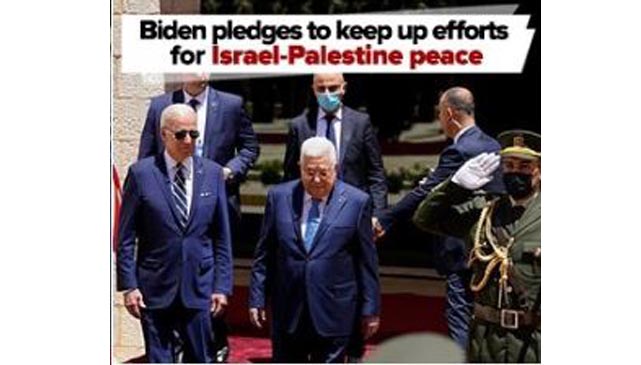 WASHINGTON: U.S. President Joe Biden pledged on Friday to keep up efforts to support a just solution to the Israeli-Palestinian conflict even though the goal of a two-state solution appeared far off.

Speaking alongside Palestinian President Mahmoud Abbas in Bethlehem, Biden said the United States would not give up on the goal of a just settlement to the decades-long conflict between Israel and the Palestinians.

“Even if the ground is not right at this moment to restart negotiations, the United States and my administration will not give up on trying to bring the Palestinians, Israelis and both sides closer together.”

Palestinians require a political path towards peace with Israel, even if a two-state solution to the conflict appears far off, US President Joe Biden said in the occupied West Bank Friday.

“There must be a political horizon that the Palestinian people can actually see or at least feel. We cannot allow the hopelessness to steal away the future,” Biden said alongside Palestinian president Mahmud Abbas in Bethlehem.

US INSISTS ON ‘FULL’ ACCOUNTABILITY OVER SLAIN AL JAZEERA REPORTER

“The United States will continue to insist on a full and transparent accounting of her death,” Biden said alongside Palestinian president Mahmud Abbas in the occupied West Bank city of Bethlehem.

Biden, struggling to pronounce her name, said Abu Akleh “was performing very vital work” when she was killed in May.

Earlier this month, the U.S. State Department concluded that Abu Akleh was likely killed by Israeli fire as she reported on a military raid on the Jenin refugee camp in the West Bank. The report said it found no reason to suggest her killing was intentional.

Palestinian leaders, including Abbas, as well as Abu Akleh’s family, have rejected the State Department report and called for accountability for the Israeli military.

Speaking before Biden, Abbas said, “the killers of the martyred journalist Shireen Abu Akleh, they need to be held accountable.”