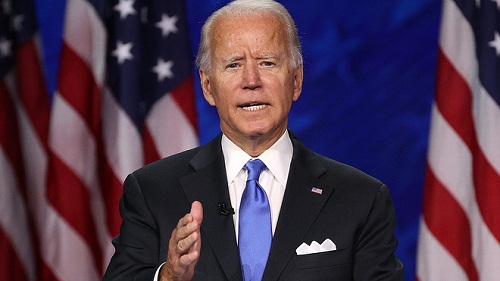 In a time of tumult and a confluence of crises, Joe Biden was sworn in as the president of the United States, at a US Capitol that, according to Jonathan Lemire, “had been battered by an insurrectionist siege just two weeks earlier” declaring that “democracy has prevailed” and summoning American resilience and unity to confront the deeply divided nation’s historic and cataclysmic woes.

Then, according to Associated Press, “taking his place in the White House Oval Office, he plunged into a stack of executive actions that began to undo the heart of his polarizing predecessor’s agenda on matters from the deadly pandemic to climate change”.

As Biden administration pushes forward on the coronavirus front,deadly virus continues to surge and states complain they are running out of vaccine doses.Enhanced production, better distribution and administration of the vaccine are the starting points to control the disease. Easier said than done!

It is heartening that despite domestic pressures, President Biden has orderedhisadministration to support projects to deploy COVID-19 vaccines, diagnostics and therapeutics to people in need around the world. Washington will cease reducing US staff counts at the World Health Organization and will pay its financial obligations to it.

According to Steve,Republicans are waking up to a Washington where Democrats control the White House and Congress, adjusting to an era of diminished power, deep uncertainty and internal feuding. At the heart of the Republican reckoning lies a fundamental question with no clear answer: Without Trump, what does the modern-day Republican Party stand for? Republicans have just begun to decide whether to continue down the road of Trump’s norm-shattering populism or return to the party’s conservative roots.

Lara Seligman and Bryan Benderhave brought to light a rare fault line of the US state system, regarding Pentagon’s resistance to Biden’s team during transition. “Defence has traditionally been a bipartisan business between and among professionals, and this is terrible optics for those who want to copy this pettiness in the future,” said Mackenzie Eaglen, a fellow at American Enterprise Institute. The effort to block the transition from key national security information is “useless, poor form, and horrible precedent.”According to POLITICO, briefings on some of the pressing defence matters never happened, some were delayed to the last minute, or were controlled by overbearing minders from the Trump administration’s side.

The Pentagon blocked incoming administration from gaining access to critical information about current operations, and the Covid-19 vaccine distribution programme as well. Effort to obstruct was led by senior White House appointees at the Pentagon, which is unprecedented in modern presidential transitions. Biden openly decried it calling it “nothing short, in my view, of irresponsibility”.

Tensions between the Pentagon and the Biden agency landing team emerged almost the moment the General Services Administration authorized the transition to begin in late November after an initial delay following the election. While the military side of— the Joint Staff and the geographic combatant commanders — were more cooperative, the civilian side set up roadblocks at every turn.“They really should not be allowed to get away with this. It’s just completely irresponsible and indefensible,” said one transition official. “To play politics with the country’s national security is just really unacceptable.”Transition “personnel are not government employees and thus limited to some extent on what they can receive,” Gough said. “Membership on a transition team alone is not a license to access confidential, privileged or classified government information.” But people with the transition said the outgoing team’s conduct went far beyond the norm and pointed to loyalists installed by the White House as the main reason for the obstruction.

During a time when the US is vastly divided, Biden’s words felt like the glue to seal it back together.There was no denying the overall sense of solidarity and hope within Biden’s speech. “This is America’s day. This is democracy’s day. A day of history and hope,” President Biden said. “Politics doesn’t have to be a raging fire, destroying everything in its path. Every disagreement doesn’t have to be a cause for total war. And we must reject the culture in which facts themselves are manipulated and even manufactured,” Biden said. “Our history has been a constant struggle between the American ideal that we are all created equal and the harsh, ugly reality that racism, nativism, fear, demonization have long torn us apart. The battle is perennial, and victory is never assured,” Biden added.But the answer is not to turn inward, to retreat into competing factions, distrusting those who don’t look like you do, or worship the way you do, or don’t get their news from the same sources you do. “We must end this uncivil war that pits red against blue, rural versus urban, conservative versus liberal”. “We can do this if we open our souls instead of hardening our hearts.If we show a little tolerance and humility.If we’re willing to stand in the other person’s shoes just for a moment.

Biden has kept his word. His spending proposal sets aside $400 billion to address Covid-19; $1 trillion in direct relief to families and individuals; and $440 billion to help communities and businesses hit the hardest by the pandemic. The proposal envisages: Topping up the $600 cash relief passed by Congress last month with $1,400 payments additionally;A hike in unemployment benefits from $300 to $400 per week through September;Fourteen weeks of paid sick and family and medical leave;A rise in the national minimum wage to $15 per hour;$160 billion earmarked for a broad range of programmess, including Covid-19 vaccination, testing, therapeutics, contact tracing and personal protective equipment;$170 billion for schools.It is an unabashedly progressive agenda that the left has been trying to advance for decades.

At least for the moment, the old ways are back: reverence of custom, rituals dating back two centuries, scenes of grace, calls for unity. Four years after Trump’s dark portrayal of “American carnage,” Biden set out his intent on the same platform of the flag-bedecked Capitol to write “an American story of hope,” Calvin Woodward writes.