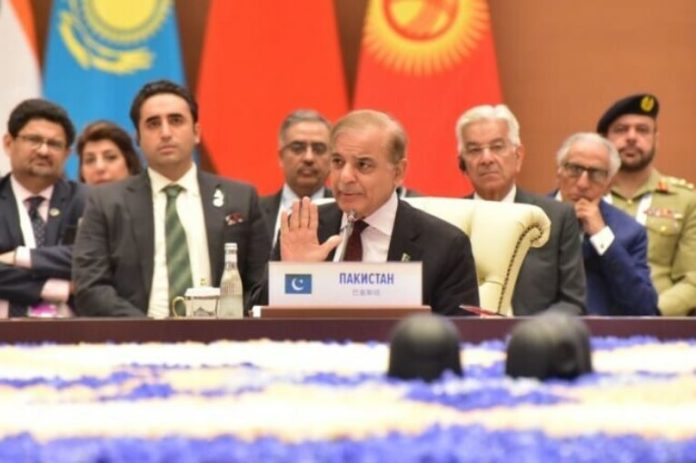 Samarkand: Prime Minister Shehbaz Sharif said on Friday that it would be a “big mistake to ignore Afghanistan this time around”, highlighting that peace in Pakistan and Afghanistan was interlinked.

He made the remarks as he addressed the Shanghai Cooperation Organization’s (SCO) Council of Heads of State (CHS) meeting in Samarkand.

Shehbaz had arrived in the historic city of Samarkand on a two-day visit on Thursday. Foreign Minister Bilawal Bhutto, Finance Minister Miftah Ismail, Defence Minister Khawaja Asif are among the officials part of the Pakistani delegation.

On the second day of his visit, the prime minister attended the close-format CHS meeting at the Congress Centre where participants were welcomed by Uzbekistan President Shavkat Mirziyoyev.

At the outset of his address, the premier deviated from the text of his speech as he talked about Afghanistan. “As you know Pakistan is a neighbouring country of Afghanistan, and peace in Afghanistan will ensure peace in Pakistan,” he said.

He went on to say that the world would have to work together to support all “good initiatives” in Afghanistan. “Therefore, it will be a big mistake if we ignore Afghanistan this time around.”

It is Pakistan’s opinion that strengthening Afghanistan in the security and counterterrorism domain should run parallel to the SCO’s socio-economic support to the Afghan people, he said.

PM Shehbaz said the international community must support efforts to build a sustainable Afghan economy. “Unfreezing Afghanistan’s financial assets remains a crucial need in this regard.”

For their part, Afghan authorities would do well to build a future based on inclusiveness and respect for human rights for all citizens, especially women and minorities, including effective steps against terrorism, he said.

Highlighting Pakistan’s fight against terrorism, he urged the SCO states to join hands and “fight this menace of extremism, separatism and terrorism and wipe it from the face of this earth”.

Calls on SCO state to ‘build a wall’ against climate change

PM Shehbaz also highlighted the devastation Pakistan had witnessed due to the recent catastrophic floods. “I have never before seen this kind of devastation.”

Stagnant water is causing a rise in waterborne diseases, such as malaria, he highlighted as he thanked SCO members for extending their support during this time of need.

The prime minister said Pakistan would eventually overcome this crisis as he estimated the damages to be “billions of dollars”.

“But […] these devastating floods in Pakistan are most definitely climate change-induced […] Cloud outbursts, unprecedented rains combined with hill torrents, all of this put together made Pakistan look like a sea of water.”

We are going to stand on our own feet but will this be the last time a country is going to fall victim to this devastation, he asked as he appealed to the SCO to “build a wall” against the menace of climate change.

But that can only be achieved through a well-thought out and sustainable plan, he said. “Our carbon emission is less than one per cent. Yet nature had this in store for us.”

Let’s make a plan to save our future generations, he said.

He concluded his speech by reaffirming Pakistan’s “strong and unwavering commitment” in advancing the objectives of the SCO.

Meanwhile, the Prime Minister’s Office tweeted about the bilateral meeting between PM Shehbaz and the Chinese president, saying the latter described the prime minister as “a person of pragmatism and efficiency” and a leader with “a longstanding commitment to China-Pakistan friendship”.

In a tweet later in the day, the defence minister said that PM Shehbaz had “very successful” talks with Putin and Xi.

“Both of them have officially invited Shehbaz Sharif to visit their countries. The prime minister has accepted both invitations. There will be a visit to China in November 2022,” the defence minister confirmed.