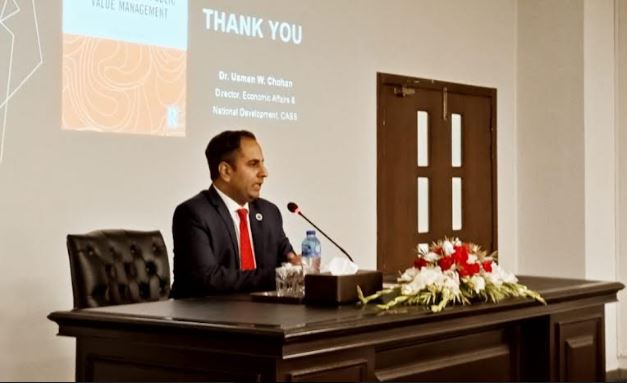 This was one of the key messages at the launch ceremony of the book Pandemics & Public Value Management, held at the Centre for Aerospace & Security Studies (CASS) in Islamabad. Written by CASS Director of Economic Affairs & National Development, Dr Usman W. Chohan, the book discusses the pandemic in the global and local context through the lens of Public Value Theory.The book launch ceremony included speakers who are leading academic experts from the United States, Italy, and Canada.

Professor Karl Moore from McGill University, Canada described the comprehensive nature of the book as ideal for drawing lessons from challenging experiences. He pointed out that one of the most important points in the book was how businesses had evolved, especially during the pandemic and the parallels between the business world and public value.

Speaking from the University of Ferrara, Italy,Professor Enrico Braccistressed that ‘Public Value’ was not just about public value organisations providing service. It was also about co-production, collaboration between states, public service organisations and the citizen in general; and the book demonstrated how public value could be usefully deployed.

Professor Ana Ruchtsman from the United States expressed her view on the importance of understanding the impact both on lives and on livelihoods from the pandemic and stated that the lessons of this book apply to various international organisations and contexts. Moving forward tailored public health measures would be critical to achieve both public health related goals and economic, trade and labour related goals, she said.

The author Dr Usman Chohan’s presentation of his book highlighted the major success that Pakistan achieved through a multistakeholder effort that involved political, bureaucratic, and civil society elements working in unison towards a common goal. He argued that Pakistan had demonstrated an outstanding ability to find the scientific basis for solving problems in society, and Pakistanis should never forget how they synergized their collective efforts to achieve world-class results.

Discussing how Pakistan and India had handled the COVID-19 pandemic, President CASS Air Marshal Farhat Hussain Khan (Retd)highlighted that one of the most important differences between the two countries was that for Pakistan, preserving lives and livelihoods, public health and the economy were equally important. He pointed out that the while the pandemic shook the entire health and logistics of the globe, its effects were still continuing and visible on the streets of Pakistan in the form of economic turmoil. While optimistic that Pakistan had the capacity to achieve any target in which it invested its most sincere efforts, he urged that the governmentmust ensure preparedness for the large-scale challenges of the future, which requires hard work in the present time. ‘Decision-making in society must reflect the values of the people and intent to serve the people’, he concluded.

The book launch event marked Dr Usman Chohan’s fourth book in the past four years, published with Routledge, and the launch event was attended by scholars, think tank specialists, and members of the public.