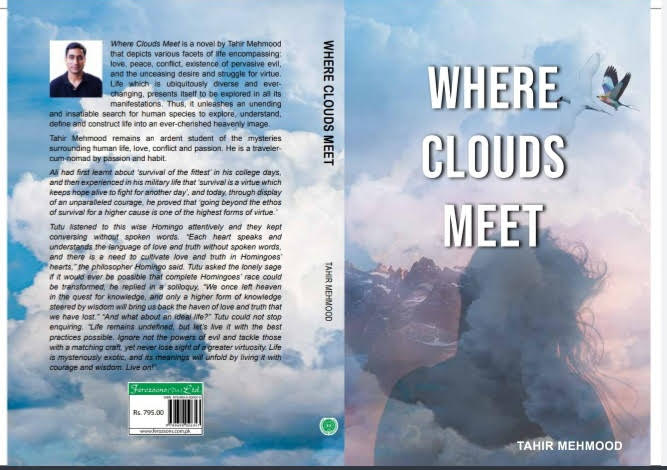 The worth of any book can be gauged via critical analysis that how much it has been able to incite the reader’s mind to do critical thinking upon the themes. Any book proves to be void without the proper theme imbedded with the plot. The heavier the themes are, the heavier the story is for the readers.

‘Where Clouds Meet’ written by Tahir Mehmood is one such book that weighs heavier on the literary scale when it comes giving the cognition exercise to its readers. Providing a range of philosophical interpretations on life, Tahir has come up with an ideal literary work of Fiction. Based on Love in particular, it has been enriched with themes like Warfare, Nature, Survival of the Fittest, Soldiery, Romanticism, Idealism, Realism, Friendship and Individualism. Such a novel happens to be appealing and thus becomes successful to convey the message.

Having set in the background of Soviet Invasion of Afghanistan in 1979, the post invasion conditions throughout 1980s and a beautiful love story of a young soldier Ali, it is a ‘novel of happenings’ narrated beautifully. The title, ‘Where Clouds Meet’ is to present the concept of ‘Eternal Love’ which is beyond this world. Out of the set-boundaries of world. The writer here, has conveyed it well love unmet is, ‘Divine.’

The novel opens up with a breath taking natural sceneryof a lake in Naran Valley. A young soldier Ali who is found enjoying the green lush valley amidst the high raised mountains. Ali is the first protagonist of novel. He remains in the main plot till his martyrdom. He has got the mind and body ‘intoxicated’ by the ecstasy of love for Motherland. He has got that trance of patriotism that nurtures the true soldier’s soul in him.

One finds awonderful description of Individualisminthe character of Ali. A Literary Movement from the 18th and 19th Century that propagates an ideal of ‘human’who realizes the ‘worth’ as wellis able to ‘utilize’ the given potentials to the best. Ali has all the morals and ideals of Individualism. Ali appears an ‘impeccable’ in making the calculations for all the tasks assigned to him. He proved to be highly vigilant from taking care of his soldiers’ meal to building the most intimidating observation posts and then for his last post at the Point 4777 before the martyrdom.

To the surprise of many, the second protagonist is not a human but the high-mountains- bird that the author has named it, ‘Tutu Titu’. His part of plot runs with the two major themes Survival of the Fittest and Individualism. He descends from the mountains to know about the world of ‘Homingoes’ to whom he thinks the strange specie. Tutu calls humans the ‘Homingoes.’ He goes on the‘journey of learning’, ‘research’ and seeking ‘wisdom’ via many errands and encounters.
Throughout his journey, he is in a spell-bound state to study humans. He becomes an ardent observant in this regard. The two words, ‘Use’ and ‘Work’ help Tutu to grow and be acquiesced with the norm that humans are way more skilful in leading the life. Tutu represents the ‘Free Soul’ or ‘Free Will Human.’

The author has dedicated a great part of discussion on warfare and soldiery. There are many pages with the purpose of sharing the military details. Many readers will find it much interesting to read about the details of Transit Camp, Patrolling, Reconnaissance, Observation Post, Command Post and Command Bunker. One get to know so much about the Military Service in real as well in the action i.e. Planning, Reporting and then Immediate Response Action for the enemy. There are warfare theories also in the real action Deterrence and at time the Pre-Emptive strikes.

The theme of Loveseems to be glorified in the character of Professor NKK. He has a soul of nomad. He is filled with the wisdom and intellect. Despite the fact that life has been horribly cruel to him, he manages to give love to the fellow humans. The time and circumstances have transformed him in thepersonification of love. Now, he has become a philosopher to interpret the life and to seeking its meaning and purpose. NKK’s mantra for love is,

“Love is a Divine manifestation which has put a halo around the universe.”

This book is a ‘stand-out’ than many other contemporary books. It has got to offer so much for its reader. For any young officer, it is a complete guide for learning soldiery. For any history student, it brings the concrete details. For any common individual, it shares a useful read to fit in the society for the survival.For students of peace and conflict, it reveals that the war is sacred too and actually comes in the field to prevail the good over evil. It is definitely right to say here, Tahir has written one Classic Literature kind of literary masterpiece. He has strengthened the‘Gripping Narration’ in this novel. He amps up the reader’s mind while creating an irresistible picture in the narration. He knows the art of storytelling. He proves it aptly,

“We humans are the story telling creatures in life, so make it an interesting read.”