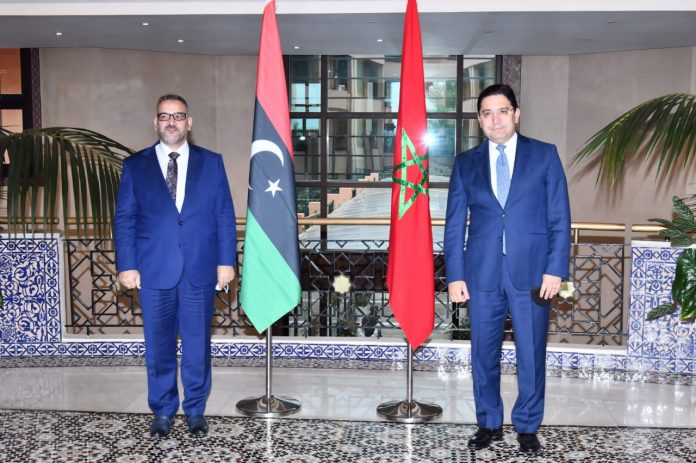 Rabat, (DNA) :  There is no other alternative to the Skhirate political agreement to settle the Libyan crisis, Minister of Foreign Affairs, African Cooperation and Moroccans Abroad, Nasser Bourita, said Wednesday in Rabat, stressing that this agreement represents the reference document.

The Skhirate agreement is a basis which cannot be excluded in the search for any solution to the Libyan crisis, Mr. Bourita told reporters following talks with Chairman of the Libyan High Council of State, Khaled Al Mechri.

The Minister stressed that this agreement grants legitimacy to institutions and to all the components of the dialogue and must remain a reference in the context of all the developments in this issue and the resolutions of the UN Security Council.

However, he noted that this agreement can be developed or adapted to reality, recalling Morocco’s support for all efforts aimed at settling the Libyan crisis and its willingness to continue its positive neutrality for the search for a solution, away from any foreign interference.

His Majesty King Mohammed VI, May God Assist Him, supports all the efforts and initiatives of the Libyans to reach a solution that preserves Libya’s national unity and sovereignty and makes it possible to avoid foreign interference, Mr. Bourita said, reiterating Morocco’s position in support for the role of the High Council of State and the House of Representatives as important and necessary bodies for the success of any settlement of the Libyan crisis.

These two bodies represent the essential nucleus for reaching a solution since they represent legitimacy and are two foundations of the political agreement as well as they are represented throughout the Libyan territory and among the Libyan people, he pointed out.

They constitute the essential basis on which any agreement to end the crisis must be based, he continued, adding that Morocco has always encouraged this dialogue and interacts permanently with these two bodies.

The Minister also congratulated the two delegations which took part in the Libyan Dialogue held in Bouznika for the spirit of responsibility and consensus which marked the debates on article 15, while making prevail the interest of Libya.

He called for the continuation of the positive dynamic created by the Libyan Dialogue in Bouznika with the same spirit and principles and within the framework of the same approach adopted by Morocco which aims to allow Libyans to conduct the dialogue with mutual respect, deeming the Bouznika consensus as important.Mr. Bourita also hailed the positive spirit, the support as well as the efforts of accompaniment of Khaled Al Mechri to the Libyan Dialogue in Bouznika.