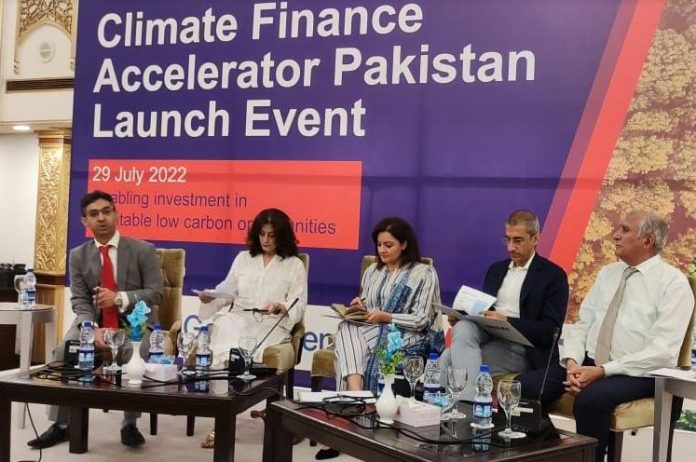 ISLAMABAD, JUL 29 /DNA/ – The Climate Finance Accelerator (CFA) was launched in Pakistan today at an event organised in the Marriot Hotel, Islamabad. The Federal Minister for Climate Change, Sherry Rehman, attended the event as a chief guest. The technical assistance programme responds directly to the urgency and scale of the climate crisis by supporting highly promising low carbon projects to become more appealing to investors, so that they can secure funding more readily.

The CFA approach addresses the challenges involved in attracting climate finance to the places where it is most needed. By bringing together project developers and financial experts who can develop and finance climate projects at scale, the CFA will support Pakistan’s efforts to implement its Nationally Determined Contribution (NDC) pledge under the Paris Agreement, deliver emissions reductions, and raise its overall climate ambition.

The CFA programme is operational in seven other countries globally and is being delivered by an alliance of climate finance experts, led PwC and Ricardo Energy & Environment. It is funded by the UK Government’s Department of Business, Energy and Industrial Strategy (BEIS) and is implemented in Pakistan by DAI as the in-country partner.

CFA Pakistan is initially looking for around ten projects at the pre-feasibility stage that are seeking investment of at least USD$4 million. The CFA call for proposals is open from 2 August until 31 August. Projects wishing to be part of CFA Pakistan should complete the online application.

The projects will be selected from the energy, water, sanitation and hygiene (WASH), agriculture, clean transport, and forestry sectors – priority sectors to achieve Pakistan’s climate commitments. These projects will be supported by technical, financial and gender equality and social inclusion experts to help them understand and overcome barriers to investment.  The CFA will also work with policymakers in the Government of Pakistan to share insights to support the development of the enabling environment for climate finance.

Pakistan’s Federal Minister for Climate Change, Sherry Rehman said:“Climate finance needs to level up the infrastructure, through catastrophe bonds, blue bonds, and other such workable initiatives. Recently, at the Petersburg Dialogue, loss and damage were central to the agenda of the entire discourse. At this year’s COP 27, as chair of G77+China, Pakistan will ensure that climate financial justice and loss & damage are at the core of all multilateral negotiations. Pakistan emits less than 1% of GHGs but still bears the repercussions of activities carried out by the biggest world polluters. We need to expedite our adaptation efforts and act now, not tomorrow. The Climate Ministry is now moving ahead with creating Pakistan’s first National Adaptation Plan.”

Development Director, British High Commission, Annabel Gerry said: “The Climate Finance Accelerator will build partnerships between projects, the financial community, and policymakers to help low carbon projects looking for investment. The launch of CFA Pakistan underlines the UK’s firm commitment to supporting the effort to fight climate change in Pakistan. I hope that it will lead to the creation of a sustainable pipeline of low carbon projects that make a real contribution to tackling the climate emergency.”

CFA Pakistan Project Director from DAI, Eldana Djumalieva, said:“Pakistan is amongst the top ten countries in the world most affected by climate change. Climate action is a pressing need in Pakistan. The Climate Finance Accelerator represents an initiative that will raise awareness of available financing for projects with a pro-climate approach, linking project developers and financiers. The key is to adapt to as well as mitigate climate risks, placing emphasis on avoiding investments with a carbon ‘lock-in’, or emissions-intensive assets and processes that will continue operating when lower-carbon options become available to replace them. To this effect, the CFA work will closely align with Pakistan’s climate plans, coordinating with the relevant agencies and seeking to exert a concerted effort in facilitating low carbon transition of the economy.”