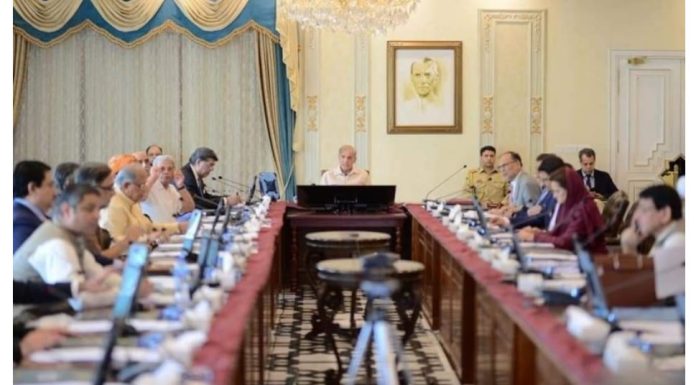 ISLAMABAD, MAY 31: Prime Minister Shehbaz Sharif on Tuesday constituted a five-member committee to chalk out a plan of action to deal with anti-state activities as the federal cabinet expressed concerns over recent statements by PTI leaders regarding the party’s Azadi March.

Interior Minister Rana Sanaullah and Adviser on Kashmir Affairs and Gilgit-Baltistan Qamar Zaman Kaira are among the members of the committee.

During the meeting, the cabinet expressed grave concerns over the recent statement of Khyber Pakhtunkhwa Chief Minister Mahmood Khan. A day earlier, Khan had said that he would use the full force of KP when PTI chief Imran Khan gives the next call for protest.

The meeting also took notice of Imran’s remarks in the buildup to his party’s recent march as well as his admission that some of the protestors were armed.

Future anti-state marches to be dealt with ‘iron hand’

The federal cabinet was assured that any anti-state long march in the future would be dealt with an iron hand. The interior minister also informed the meeting’s participants that the PTI’s Azadi March was an “anti-state conspiracy” and not a political activity.

He alleged that it was an “armed attack on the state” under the guise of political activity, and claimed that no law enforcement official was carrying a weapon at the site of the march.

PM Shehbaz said that he had also directed the interior ministry and law enforcement agencies to not carry weapons at the march venue.

The cabinet felicitated the nation on “rejecting” Imran’s Azadi March and lauded law enforcement agencies for “performing their duties efficiently”.

During the meeting, it was highlighted that the PTI utilised the resources of the Khyber Pakhtunkhwa government by assembling armed groups at KP House a day before the march, while the Gilgit-Baltistan chief minister attacked police personnel.