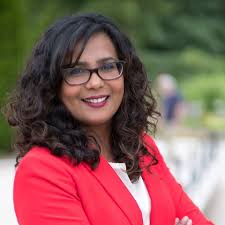 TORONTO (DNA) -Canadian MP Iqra Khalid has joined a stellar line-up of academics, authors and activists in Canada to call for an end to Indian atrocities in the held Kashmir by urging the international community and the Canadian government to work for “a peaceful solution that preserves and protects the rights of the innocent Kashmiri people as shown by UNSC resolutions”.

Addressing the webinar arranged by the Canadian Foreign Policy Institute (CFPI) and 25 civil society organisations on the subject of “Canada’s Silence on India’s Colonization of Kashmir”, Iqra Khalid who was elected in the House of Commons of Canada in the 2015 federal election, expressed her deep concern for “the ongoing conditions of the Kashmiri who continue to face curfews with limited access to food supplies and communication”.

She said the Canadian government is deeply concerned with escalation and detentions and our Minister for Global Affairs met with Kashmiri Canadians to directly hear about their first-hand experiences and the plight of their families and loved ones stuck in the deplorable situation”.

Iqra Khalid said she had spoken many times already and she would continue to speak about the wellbeing of the people of Kashmir. “It is time for all parties in the international community to sit together and find a peaceful solution that preserves and protects the rights of the innocent Kashmiri people as shown by UNSC resolutions one of which Canada co-sponsored,” she said.

The webinar was also addressed by an elite panel of academics, authors and civil society activists including noted attorney, author and entrepreneur Imraan Mir who has researched and written on various topics related to Kashmir and is a co-founder of the Kashmir Law and Justice Project. Haley Duschinski, an Associate Professor of Anthropology and Director and Graduate Director of the Center for Law, Justice and Culture at Ohio University, also addressed the webinar. Other participants included Malavika Kasturi, Associate Professor of South Asian History at the University of Toronto, Siddiq Wahid, a former Scholar-in-Residence at the Centre for Public Affairs and Critical Theory at Shiv Nadar University, and Azeezah Kanji, legal academic and writer who received her Juris Doctor from University of Toronto’s Faculty of Law, and Masters of Law in Islamic Law at the School of Oriental and African Studies, University of London.

The speakers spoke on a host of issues impinging on what they called strange and unfortunate silence of the Canadian government on India’s colonization of Kashmir. The event offered an overview of the long-standing conflict in the light of international law; human rights situation and issues of impunity; Hindu nationalism project and the colonization of Kashmir; geopolitical perspectives in light of China’s involvement; and accountability and India foreign policy.