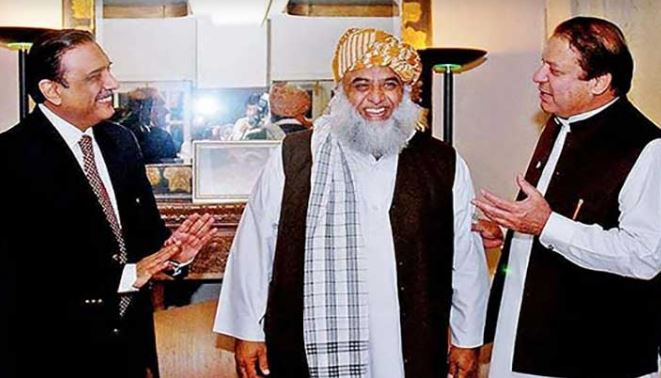 ISLAMABAD – A case has been registered against former Prime Minister Nawaz Sharif, former President Asif Zardari and PDM chief Maulana Fazlur Rehman for making statements against the institutions on Friday.

The case was registered in Dera Ismail Khan in the province of Khyber Pakhtunkhwa by Additional Assistant Commissioner Revenue Munir Ahmed, while retired Capt Safdar, Federal Interior Minister Rana Sanaullah and Shahbaz Gill have also been named in the case.

It should be noted that the Punjab Home Minister Colonel (retd) Hashim Dogar on Thursday mentioned of another case registered against Rana Sanaullah.

In a statement on Twitter, the provincial minister said that the First Information Report (FIR) has been launched against the federal minister for threatening honorable judiciary and government officials in Gujrat’s Industrial Area.

He further said that the charges framed in the FIR are serious and action will be taken in accordance with the law.

On the other hand, former federal minister and Pakistan Muslim League-Quaid (PML-Q) leader Moonis Elahi while reacting to the FIR lodged against the PML-N leader said that he [Rana Sanaullah] will be arrested soon.

The PML-Q leader said that as the federal government is making false cases against Pakistan Tehreek-e-Insaf (PTI) chairman Imran Khan, the masses have made a true case against Rana Sanaullah.

Earlier, The cricketing icon-turned-politician Imran Khan has faced mounting legal challenges over the last few days. The last week saw multiple cases filed against him, including one under anti-terrorism laws for “threatening” senior police officials and a female judge, as well as contempt of court and unlawful assembly.

The former PM was charged with threatening current government officials and a judge Sunday after he criticized the individuals at one of the large, boisterous rallies he has held since he was ousted as prime minister in April in a parliamentary vote of no confidence. The rallies are attended by thousands of supporters and feature fiery speeches by him denouncing Pakistan’s current government as corrupt and a puppet of foreign powers.

“Is this a banana republic? Is there any law here?” Khan said in brief remarks after exiting the court. “Those who are making these decisions, I want to tell them, you better think about what’s good for our country.”

The government is “afraid of the rising popularity of our party, and that’s why there are cases like this,” he continued. “But they are making a joke of this country.”