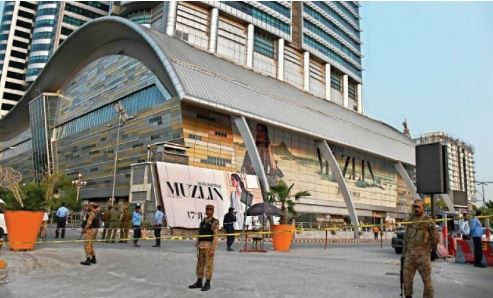 The notice put up on the mall’s entrance stated that CDA’s building control department had sealed the mall.

After the mall was sealed businessmen blocked Jinnah Avenue in protest and warned that the city will be shut down if the mall is not opened.

Meanwhile, PTI has linked the closure of the mall to the protest launched by Azad Jammu and Kashmir Prime Minister Sardar Tanveer Ilyas, who owns the mall, during Prime Minister Shehbaz Sharif’s speech in Mangla.

“Sealing of [mall] by PDM mafia in response to PM AJK censuring Shehbaz Sharif for not mentioning sacrifices of Kashmiris shows there is law of the jungle in Pakistan since last eight months,” claimed Khan.

The PTI chairperson claimed that the move “sends negative signals to Kashmiris” and was a question for the judges. On the other hand, PTI leader Fawad Chaudhry also slammed the move.

“AJK PM during [Prime Minister] Shehbaz Sharif’s speech stood on his seat and protested against Pakistan’s weak stance on Kashmir issue,” tweeted Fawad. He alleged that after the speech the AJK PM’s acts his car was stopped in Mangla as well. “Such a fascist and undemocratic government has not come in the history of Pakistan, if such actions will be taken against Prime Minister of AJK only on protest, then what message are you giving to the occupied Kashmir? what message are you giving to the investors in this country?” asked Fawad. He added that the economy will further go down with this action, and urged for the restoration of democracy.

In a tweet, Minister for Information and Broadcast Marriyum Aurangzeb berated the PTI chief and said that a person who had “failed” on several fronts, including governance and foreign policy, should refrain from lecturing PM on the Kashmir issue. A day earlier, AJK PM Sardar Tanveer Ilyas had interrupted PM Shehbaz during a speech for “not mentioning the sacrifices of Kashmiri people”.

The interruption occurred during PM Shehbaz’s speech after Sharif’s inauguration of the refurbishment project of units 5 and 6 of the Mangla Dam Hydroelectric Power Plant, built on the Jhelum river in Mangla.