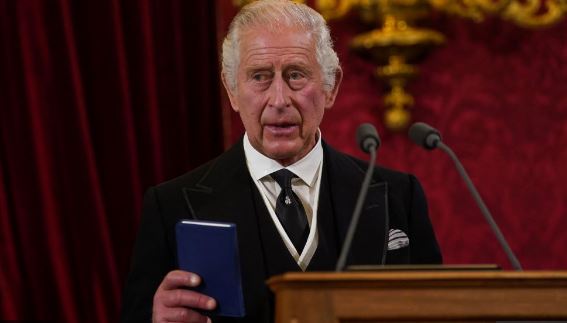 London: With a trumpet fanfare and gun salutes, Charles III was officially proclaimed king at a pomp-filled ceremony on Saturday, at which he pledged to emulate his late mother Queen Elizabeth II and serve for the rest of his life.

A court official wearing a feathered bicorn hat declared Charles “our only lawful and rightful” monarch from the balcony of St James’s Palace after a historic Accession Council meeting of senior royals, clergy and government.

“I am deeply aware of this great inheritance and of the duties and heavy responsibilities of sovereignty, which have now passed to me,” Charles said in a speech before swearing an oath.

“In taking up these responsibilities, I shall strive to follow the inspiring example I have been set.”

Eight trumpeters accompanied the proclamation which was followed by a rousing three cheers for the new king by red-jacketed Coldstream Guards soldiers, doffing their distinctive bearskin hats.

Ceremonial gun salutes boomed simultaneously across the United Kingdom and the proclamation — a hangover from the past where the new monarch needed to be announced to their subjects — was also read publicly in Scotland, Northern Ireland and Wales.

Charles, 73, automatically became monarch upon the queen’s death Thursday, but the centuries-old constitutional formality — broadcast live for the first time — is the latest step in the setpiece 10-day programme building up to her state funeral.

An emotional Charles set the tone for his reign in a televised address Friday in which he hailed his “darling mama” for her “unswerving devotion” during her record-breaking seven decades on the throne.

“Thank you for your love and devotion to our family and to the family of nations you have served so diligently all these years,” he said.

“May flights of angels sing thee to thy rest,” he added, quoting Shakespeare’s “Hamlet”.

The speech dominated the front pages of Britain’s newspapers on Saturday, with his heartfelt tribute to his mother headlining the Daily Telegraph, Daily Express, Daily Mail, The Sun, and Daily Star.

Charles looking pensive as he arrived at Buckingham Palace for the first time as king made the front page image on The Independent, The Guardian and The Times, which also carried the words “God Save the King”.

The new king also named his elder son and heir Prince William, 40, as the new Prince of Wales, while expressing love for his younger son Harry and daughter-in-law Meghan.

The move means William’s wife Kate assumes the Princess of Wales title once held by his mother and Charles’ ex-wife, the late Princess Diana.