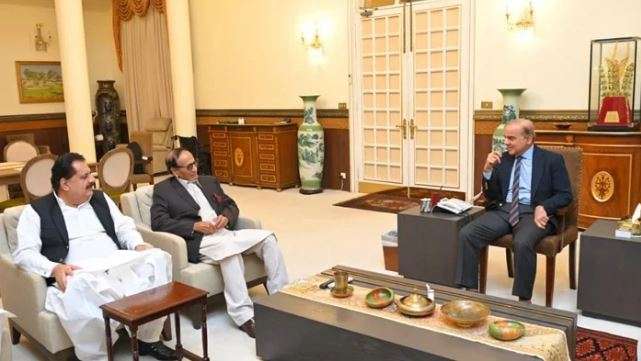 ISLAMABAD: PML-Q President Chaudhry Shujaat Hussain Tuesday advised Prime Minister Shehbaz Sharif to follow Constitution while appointing the next army chief and do not listen to anyone in this regard.

The premier held a meeting with the PML-Q chief where the two leaders held a discussion on the current political situation and financial crisis among other issues of national importance.

According to sources privy to the details, PM Shehbaz Sharif inquired about Shujaat’s health to which he responded smilingly by saying, “aap mehengai kam karain, meri tabiat behtar hojaigi [You bring down the inflation my health will improve automatically].”

The premier told him that Finance Minister Ishaq Dar has controlled the dollar rate and now the focus is on inflation.

Shujaat said that they are standing with the government but it should provide relief to the masses. “Bring down the prices of oil and other edible items,” he urged the premier.

About the appointment of General Qamar Javed Bajwa’s successor, the sources said, the PML-Q chief advised the premier to follow the book in the army chief’s appointment and don’t listen to anyone, saying “this is a sensitive matter and a national responsibility.”

At this, the prime minister said, that will happen exactly like this.

Army chief Gen Bajwa is retiring next month after completing his extended tenure and the matter has become a topic of intense debate in political circles with the PTI chief demanding the incumbent government should not appoint the chief of army chief and defer the matter to the next government.

Advising the Opposition to not politicise this sensitive appointment, the ruling alliance has made it clear that it is the prime minister’s prerogative and he will take the decision when the time comes.