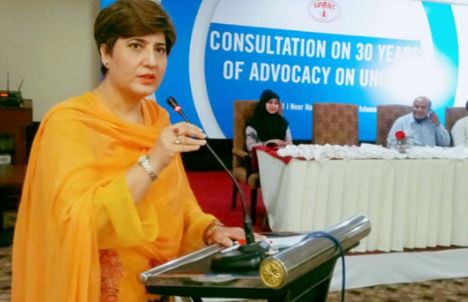 ISLAMABAD, NOV 19 /DNA/ – The Chairperson of the National Commission on the Rights of Child (NCRC) Afshan Tehseen Bajwa said that child abuse is a grave violation of children’s rights and one of the greatest threats to children’s lives, survival, development, and participation rights.

In her statement on the World Day for the Prevention of Child Abuse, she said that ensuring children’s rights was particularly important because Pakistan had a unique window of opportunity where the “youth” could truly determine Pakistan’s future. But the rising number of child abuse cases is a matter of serious concern.

The time to act is now – by strengthening child rights protection mechanisms and legislation, as well as through massive public awareness campaigns.

The commission has established a complaint mechanism that has effectively addressed the problem of child abuse in Pakistan. In addition, she added that the NCRC has analyzed various child rights violations in Pakistan and issued policy briefs on street children, child marriages, forced conversion, child domestic labor, juvenile justice system, etc. to identify gaps and recommend remedial measures to key stakeholders to address problems of child abuse in Pakistan.

The Government of Pakistan has taken a number of initiatives to protect and promote the rights of children, but given the scale of the problems in Pakistan, these are not enough and urgent action should be taken. The enactment of laws and implementation mechanisms vary from province to province, but overall enforcement remains a challenge. There is a need to establish separate Ministry/Departments for children at the federal and provincial levels.

In addition, advisers for children should be appointed in the federal and provincial cabinets who can advocate for the concerns of almost half of the children in Pakistan.

The world also celebrates Universal Children’s Day on 20 November. Children are the most valuable resource of any society: the future engine of prosperity, harmony, and creativity.

On the occasion of Universal Children’s Day, the NCRC Chairperson shared that the Commission is committed to strengthening laws that govern children’s rights, and will continue its work with the federal and provincial governments to advocate for the implementation of child protection laws and lobby with the relevant authorities to build a sustainable child protection system in Pakistan.

Tehseen Bajwa called on all government agencies and civil society organizations to work towards developing synergies to create a Pakistan where all children grow up in an environment free from violence and abuse and where they can develop their full potential.

Every year on 19 November, the world celebrates “World Day for the Prevention of Child Abuse”.

The Demographic Health Survey 2017-2018 found that 29 percent of women were married before the age of 18, compared to 5% of men. In Pakistan, more than 12.5 million children or nearly 16 percent of the child population are involved in child labour in Pakistan, with 13 percent to 14 percent of these children being between 5 and 15 years old.

Although the number of child marriages in Pakistan has decreased significantly over the last three decades, this practice remains a major problem throughout the country. Violent discipline continues to be a widespread problem across the country.