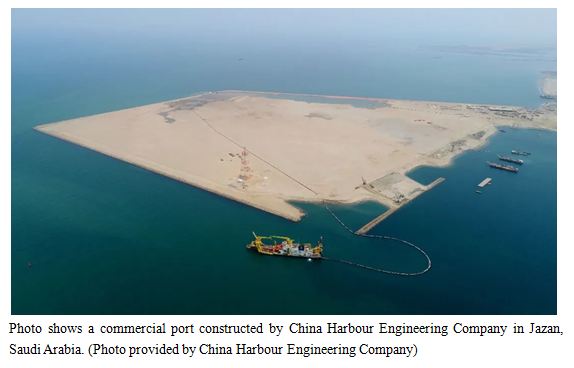 He had in-depth exchanges of views with leaders of Arab states on comprehensive cooperation as well as major international and regional issues.

Together, they jointly charted the course for China-Arab states, China-GCC and China-Saudi Arabia relations, and worked to build a China-Arab community with a shared future in the new era.

China and Arab states have deepened and consolidated their political mutual trust.

China firmly supports Arab states in upholding their sovereignty, security and stability, and supports them in pursuing a development path suited to their national conditions. Arab states have always shown their staunch support for China on issues related to its core interests and major concerns.

Arab states have actively responded to the vision of building a community with a shared future for mankind, the Global Development Initiative (GDI) and the Global Security Initiative proposed by Xi. As of October 2022, 17 Arab states have voiced support for the GDI, and 12 have joined the Group of Friends of the GDI.

China is the largest trading partner of Arab states. Their trade volume reached some $330 billion in 2021. To date, China has signed Belt and Road cooperation agreements with 20 Arab countries and the Arab League.

Together, they have fought against the COVID-19 pandemic with solidarity and cooperation. Their efficient cooperation on vaccine development, joint pandemic prevention and control, experience sharing and pharmaceuticals has set a good example for global anti-pandemic cooperation and vividly mirrors the China-Arab community with a shared future.

The two sides have been bound by a long history of friendly exchanges along the ancient Silk Road. As an envoy of friendship and knowledge, Chinese navigator Zheng He in the Ming Dynasty (1368-1644) paid multiple visits to the Arab world.

Both Chinese and Arab civilizations embody the common ideals and aspirations of mankind for development and progress, and they both champion such values as moderation, peace, forgiveness, tolerance and self-restraint.

Over recent years, learning Chinese has become a trend in Arab states. As of October this year, four Arab states had declared to include Chinese in their national educational system and 15 had set up Chinese language majors in their universities. Besides, China had built 20 Confucius Institutes and two independent Confucius Classrooms in 13 Arab states.

China-GCC relations have grown from strength to strength.

Over the recent years, China-GCC relations have maintained healthy, stable and comprehensive development, and have been at the forefront of China’s relations with Arab countries.

The two sides have established a strategic dialogue mechanism and maintained close coordination and communication in international and regional affairs.

At present, China-GCC cooperation is being gradually expanded from the traditional sector of energy to high-tech and emerging industries.

Under the current circumstances, China and GCC countries, as good brothers, friends and partners, will keep supporting each other and offering each other mutual assistance.

China-Saudi Arabia relations have embarked on a fast lane of development.

China takes the development of its relations with Saudi Arabia as a priority in its overall foreign relations, in particular its diplomacy in the Middle East.

During Xi’s state visit to Saudi Arabia in January 2016, China and Saudi Arabia established a comprehensive strategic partnership and decided to set up the China-Saudi Arabia High-level Joint Committee.

China will keep synergizing the BRI and Saudi Arabia’s Vision 2030, to build a high-level cooperation pattern in energy, economic and trade, and high-tech sectors.

It is believed that Xi’s trip will bring China-Arab, China-GCC and China-Saudi Arabia relations onto a new level. China and Arab states, drawing a blueprint for their future development, will make new contributions to safeguarding world peace and stability and promoting global development.

(Chen Weiqing is the Chinese Ambassador to Saudi Arabia)