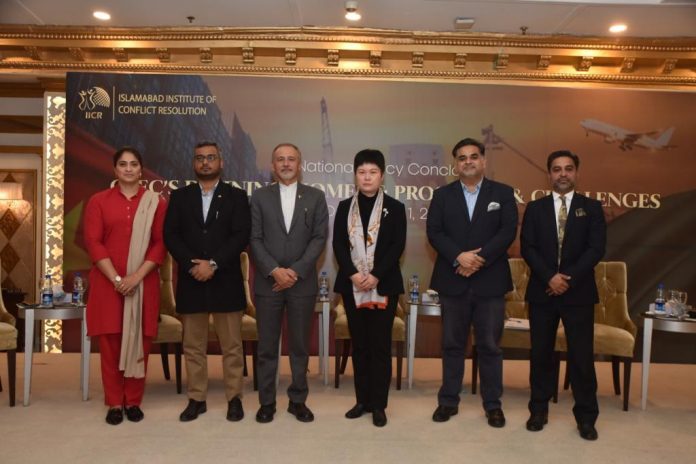 In his opening remarks Dr. AzharMahmood said that CPEC is an opportunity which was harnessed as a result of Pakistan’s geo strategic location. Due to the same reason, it has vital importance in China’s One Belt One Road Initiative because it is the enriched and shortest route of east west connectivity providing connectivity to not only region but civilization.

The First Speaker on the panel was Dr TahirAwan who focused political aspects of CPEC. There are challenges and we must deal with them said Dr. Awan. Pakistan needs to take some ideas from its Chinese friends and that is what CPC is focused on “Modernization”. Pakistan can also use and implement the idea in its own requirement, Pakistan needs modernization in order to carry on with the emerging world or else be obsolete.  Adding further he said that there is a need to link industry and institute in order to solve the challenges, Pakistan needs to institutionalize the challenges to CPEC.

Joining from Sri-Lanka,Dr Georgehighlighted that every country is unique in its outlook and none should be looked as a replication of the other rather unique relationship it has with the international community. Adding further that no country is isolated today due to its dependency on trade and China is effectively working on enhancing bilateral relations based on mutual trade. Asia has a major role in world due to huge population bulge it has. Dr. George further said that the coming century is Asian Century in which Asia would be economic centre of world and Beijing plays a significantrole as it borders south Asia which is extremely significant for its international relations.

The next speaker on the panel was Mr. Dawood Butt. Mr. Dawood said thatemerging world is talking about more politics than trade and in these times Pakistan should feel proud of CEPC rather being skeptical about it, we should introspect but not be skeptic about its productivity and benefit for Pakistan because China is leading in GDP and Pakistan is no 1 recipient of China FDI.  We need to remove bottlenecks for seamless functioning of CPEC. There is institutional consensus that CPEC is necessary to Pakistan. geography is important but history is equally important and Pakistan need to learn from Chinese history which is full of resilience.

Speaking next Mr. Shahid Raza said that threat and sanctions had not helped the world and will not in the future as well. After WW-I Germany was put under sanctions and it culminated into another world war. The problem is that we have learned from history that we never learn from history. War, threats has always resulted in destruction and decimation. Adding further he said that Pakistan’s biggest struggle is its internal political battles which halts national growth. CPEC will happen amid all the challenges it faces, it may take slightly longer but it will be accomplished said Mr. Raza. Furthermore, he said that China is inseparable part of south Asia. And Asian region despite land borders is the least connected region. We need to be connected and expand the horizons of BRI.

The last speaker on the panel was Mr. Javed Iqbal who highlighted the technological aspects of CPEC. Mr. Iqbal highlighted that the foremost need of modern world is nowhere to be seen in CPEC project. Digital infrastructure is the next frontier and Pakistani government has paid little heed to the digital and technological prospects of the project. Contrary to this China has been proactively modernizing its infrastructure through employing technology.

The session was concluded by Ms. Pang Chunxue, Deputy Head of Mission, Chinese Embassy. In her concluding remarks, she expressedher heartfelt gratitude to the guests and organizers, for their efforts and contributions to promoting China-Pakistan relations and cooperation. She also said that DuringPM Shahbaz Sharif’s meeting with President Xi, President Xi underscored that China will continue its fundamental policy of opening-up and provide new opportunities to Pakistan and the rest of the world through continuous development. She emphasized that China will further deepen synergy between its development strategies and those of Pakistan. The two sides will make full use of the Joint Cooperation Committee of the China-Pakistan Economic Corridor (CPEC), advance CPEC with greater efficiency, and make CPEC an exemplar of high-quality Belt and Road cooperation said Ms. Pang. While highlighting the benefits of CPEC she said that the landmark project of the BRI, CPEC has achieved fruitful results, bringing in 25.4 billion USD in investment, helping to add 6040 MW of electricity, 886 km of core national transmission network and 510 km of highways. Under the promotion of CPEC, Pakistan’s energy shortage has been greatly addressed, transport infrastructure has been improved, and local people have gained a large number of employment opportunities. Lastly, she said that China will always put Pakistan as its priority for cooperation and work in joint hands to address various risks and challenges at the regional and international levels, deepen the China-Pakistan all weather strategic cooperative partnership, and build a closer China-Pakistan community with a shared future in the new era!