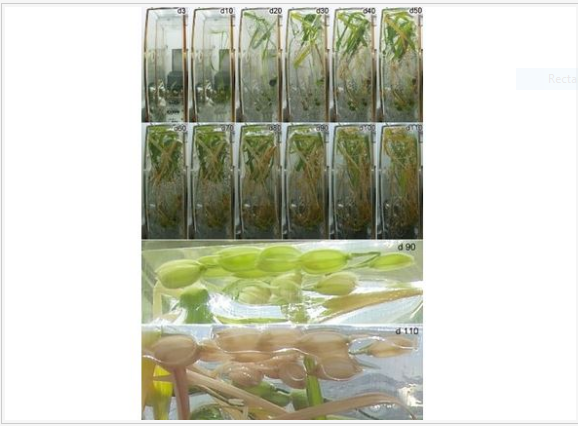 The third batch of space scientific experimental samples from China’s Tiangong space station were delivered to scientists after a return capsule, carrying astronauts of the Shenzhou-14 crew, touched down at the Dongfeng landing site in north China’s Inner Mongolia autonomous region on Dec. 4, Beijing Time. The returned experimental samples included three cold packs of rice and Arabidopsis, and a bag with four boxes of container-free materials. Rice, the main crop for humans, is a major candidate crop for the life support system in future manned deep space exploration. Rice breeding under space microgravity is one of the important directions of space botany research. To ensure long-term survival in space, humans must make sure that plants can complete the alternation of generations and successfully reproduce in space. It was the first time in history that the full life-cycle growth experiment of rice was completed in space. Previously, only thale cress, rape, peas and wheat had successfully grown from seed to seed in the space environment, but the rice had not been able to complete the full growth cycle in such circumstances. The life-cycle growth experiments of rice were handled by Zheng Huiqiong, a researcher at the Center for Excellence in Molecular Plant Sciences under the Chinese Academy of Sciences, and her team. Flowering is a crucial stage for plant reproductive development. The team also systematically studied the effects of microgravity on flowering in space using the model plant Arabidopsis Several life sciences experiments were done during 120 days in orbit. Experimental seeds of rice completed the entire growth process from seed to seed, and relevant images were acquired from space for analysis. The rice was grown after the pruning and it yielded the second crop of mature seeds in space. Besides, the experiments also completed the analysis and sampling on seed germination, seedling growth and flowering of Arabidopsis under space microgravity. Preliminary results showed that rice plants became looser in space with larger leaf angles. Short-grain rice grew shorter while the height of tall-grain rice was not significantly affected. Besides, the spiral upward movement of rice leaf growth controlled by the biological clock was more accentuated in space. Moreover, the ratooning rice can sprout two ears of rice 20 days after pruning in space, which confirms the possibility of growing ratooning rice in a small closed environment. It has provided new ideas and a solid basis for the efficient production of crops in space. It marked the first time in the world to apply ratooning rice technologies in space, and is expected to significantly increase the yield of rice per unit of volume. Scientists for the first time studied the key biological clock-controlled genes that regulate photoperiodic flowering in space. They found that for Arabidopsis, the genes’ response to a microgravity environment is significantly different from that on the ground. It has provided a new direction for using modified flowering genes to make plants better adapt to microgravity in space.