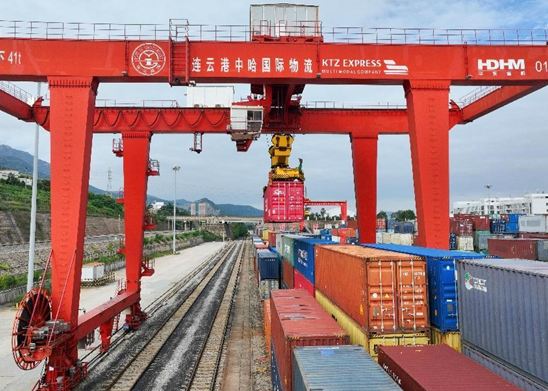 Chinese President Xi Jinping held talks with Turkmen President Serdar Berdimuhamedov at the Great Hall of the People in Beijing recently during the latter’s state visit to China.

The two heads of state announced the elevation of the China-Turkmenistan relationship to a comprehensive strategic partnership, reached important consensus on advancing the building of a China-Turkmenistan community with a shared future, and witnessed the signing of agreements on cooperation under the framework of the Belt and Road Initiative (BRI) and cooperation in other fields.

This marks China’s success in establishing a comprehensive strategic partnership, advancing the building of a community with a shared future for mankind at the bilateral level, and signing BRI cooperation documents with all five Central Asian countries.

With similar visions and goals as well as intertwined interests, China and Turkmenistan have achieved fruitful results in exchanges and cooperation in multiple fields and at all levels, and seen their bilateral friendly ties grow from strength to strength under the strategic guidance of the two countries’ heads of state.

The two countries’ decisions to establish a comprehensive strategic partnership, continuously deepen bilateral cooperation across the board, and build a China-Turkmenistan community with a shared future is expected to push forwardthe development of their bilateral relations at a higher level.

Building a China-Turkmenistan community with a shared future is an endeavor that enables the two sides to further deepen mutually beneficial cooperation, better accommodate each other’s concerns, and reinforce their everlasting friendship on the basis of mutual respect, candor, mutual trust, and mutual benefit.

The two sides should support each other on issues concerning their core interests and respect each other’s pursuit of a development path suited to their own national conditions.

It is important for the two countries to synergize their development strategies at a faster pace, make full use of such mechanisms as the China-Turkmenistan Cooperation Committee, and continue to expand the breadth and depth of cooperation, in order to create underpinnings for bilateral relations with tangible cooperation outcomes.

The two sides should deepen cooperation on law enforcement, security and bio-security, and jointly crack down on the three forces of terrorism, separatism and extremism, to build strong security shields for the development of both countries.

The two sides also need to increase exchanges in various fields and at all levels, advance people-to-people cooperation, and strengthen the emotional bond between their peoples, so as to consolidate the popular and social foundation for the sustained and sound development of bilateral ties.

These efforts are conducive to the two countries’ national development and rejuvenation and can help improve the well-being of their people.

The further elevation of the China-Turkmenistan relationship mirrors the high-level development of the relations between China and Central Asian countries.

Thirty-one years ago, China took the lead in establishing diplomatic ties with Central Asian countries, opening the door to bilateral exchanges and cooperation. Over the past 31 years, China and Central Asian countries have blazed a new trail of good-neighborly friendship and win-win cooperation, and set a good example of fostering a new type of international relations.

As Xi pointed out at the Virtual Summit to Commemorate the 30th Anniversary of Diplomatic Relations Between China and Central Asian Countries, which was held last January, no matter how the international landscape may evolve or how developed China may grow, China will always remain a good neighbor, a good partner, a good friend, and a good brother that Central Asian countries can trust and count on.

The establishment of the comprehensive strategic partnership between China and each of the five Central Asian countries and their jointly pursuing a community with a shared future for mankind at the bilateral level help safeguard regional peace, stability, development, and prosperity.

The success of the first C+C5 summit will bring into fully play the guiding role of the head-of-state diplomacy, promote new progress in the relations between China and Central Asian countries, and help both sides better cope with common challenges.

Central Asia is where the BRI was first proposed. Upholding the principle of extensive consultation, joint contribution, and shared benefits, China and Central Asian countries have empowered the BRI to bear rich fruits in Central Asia, bringing tangible benefits to local people of the region.

The China-Central AsiaGasPipeline, the longest of its kind in the world, delivered more than 400 billion cubic meters of natural gas to China as of June 2022; the completion of the KamchiqTunnel of the Angren–Pap railway line in Uzbekistan has utterly changed the way of traveling of more than 10 million people; the establishment of the China-Kazakhstan Horgos International Border Cooperation Center and the China-Kazakhstan International Logistics Base has opened the door to the Pacific Ocean for Central Asian countries; and the China-Kyrgyzstan-Uzbekistan highway has officially opened to traffic, becoming an unimpeded international transport artery that passes through lofty mountains.

As a Chinese saying goes, neighbors wish each other well, just as loved ones do to each other. Acting on the principles of amity, sincerity, mutual benefit, and inclusiveness and the policy of forging friendships and partnerships with its neighbors, China strives to enhance friendly ties, mutual trust, and converging interests with its neighboring countries.