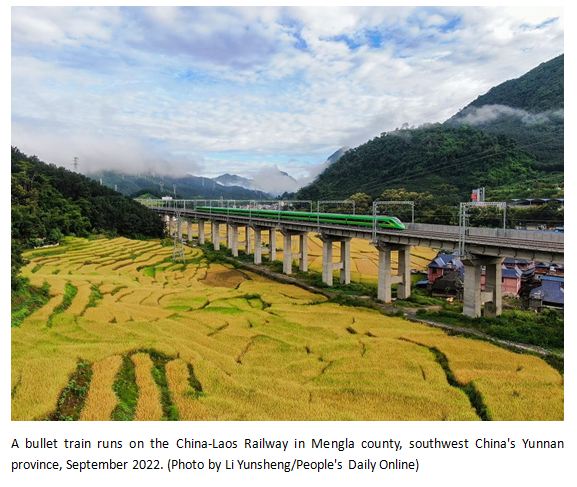 “The prices of durian in Kunming this year have been lowered, indeed,” said Deng Xiaotian from a trade company in Kunming, southwest China’s Yunnan province, after unloading the last box of Monthong durians and stocktaking.

Many citizens in Kunming have found the drop in durian prices in summer this year, and the lowest pricewas less than 40 yuan ($5.74) per kilogram. In mid-December, Monthong durians are sold at around 58 yuan per kilogram in supermarkets in the city, about 10 yuan cheaper from a year ago.

Deng attributed the lowered prices to the expanded durian production in Thailand and the China-Laos Railway. He said fruits were imported from Thailand via sea routes and highways in the past. After the opening of the China-Laos Railway, Thai durians are shipped to Vientiane, Laos first and then enter China via the railway, he introduced, adding that cross-border railway cold-chain transportation has provided Chinese fruit dealers with a brand-new channel.

“Trains carry lots of cargos and run fast, and they won’t be affected by weathers and come with less risks. Therefore, railway lowers our cost,” Deng told People’s Daily. according to him, his company imported over 50 cold-chain containers of durians from Thailand via the China-Laos Railway this year, which totaled more than 1,000 tons.

Over the past year since the railway was put into service, it has witnessed prosperous passenger and cargo businesses. As of Dec. 2, the railway had transported 11.2 million tons of cargos and carried 8.5 million passengers. Besides, 3,000 cross-border trips had been made, transporting cargo worth over 13 billion yuan.

Facilitated logistics led to investment. A 360,000-cubic meter cold-chain warehouse is currently under construction at the Gallops International Land Port in Jinning district, Kunming, and is expected to be put into use the next year.

“Cold-chain transportation of farm produce will be a major development direction of the China-Laos Railway. Especially after the Mohan railway port for inspection and quarantine was put into use on Nov. 30, imported fruits can be shipped to China all the way via railway, which has significantly improved the efficiency of customs clearance and transportation,” said Wang Wenbin, assistant general manager of Tengjin Logistics, which runs the Gallops International Land Port. He called the China-Laos Railway an important channel linking China’s huge market with the Southeast Asian market.

“Fruits from Southeast Asia are getting into the Chinese market through the China-Laos Railway, enriching the choices of Chinese consumers. In the same time, Chinese vegetables and Yunnan province’s farm produce are also exported. The railway benefits farmers and consumers both at home and abroad,” Wang noted.

He said the Gallops International Land Port has shipped and received a total of 2,868 twenty-foot equivalent units (TEUs) since the opening of the railway, including 454 cold-chain TEUs from and to Laos, Thailand, and Cambodia.

Apart from fruits, the China-Laos Railway also transports many other types of commodities. It is benefiting more and more enterprises.

Logistics firm Shanghai Rencheng started shipping cargos along the China-Laos Railway since the railway was just put into operation.

“We took the railway as a backup option, but it has become a ‘major force’ assisting our transportation. The head office established a branch in Kunming, whose export volume now accounts for nearly half of the company’s total, and our sales volume has exceeded the pre-pandemic level,” said Yang Jie, head of the company’s Kunming branch.

Shanghai Rencheng exports textile products to Southeast Asian countries and regions. Before the railway was put into use, it exported products mainly through road exports.

“Thanks to the China-Laos Railway that features fast customs clearance, fast speed, and integrated online-offline services, the transportation cost of our company has been reduced by at least 30 percent,” Yang told People’s Daily.

So far, 25 Chinese provinces, autonomous regions and municipalities have launched freight services on the China-Laos Railway, which goes to Laos, Thailand, Myanmar, Malaysia and other countries and regions. The cargos being transported have also expanded from fertilizers and daily commodities at the beginning to more than 1,200 types, such as electronics, photovoltaic products and fruits.