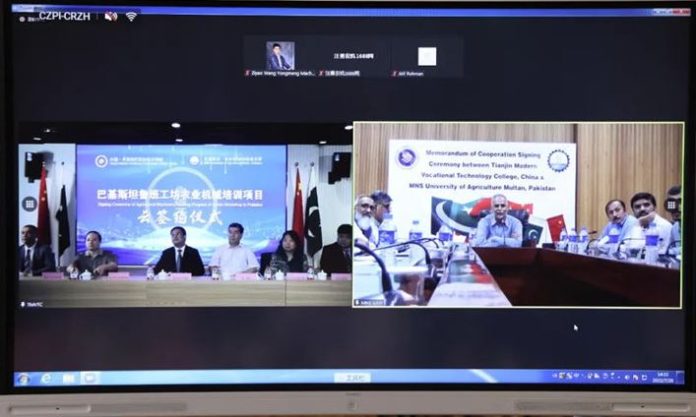 BEIJING, Aug 24 (DNA): China and Pakistan had geard up for agricultural cooperation under the China-Pakistan Economic Corridor (CPEC),  according to a report published by China Economic Net (CEN)on Wednesday.
To train talents for China-Pak agricultural cooperation, Tianjin Modern Vocational Technology College (TMVTC), China and MNS-University of Agriculture, Multan (MNSUAM), Pakistan signed online an agreement for an agricultural machinery training program of Luban Workshop in Pakistan on July 28, 2022.
The two institutions will jointly promote the sci-tech exchanges and cooperation on agricultural machinery, germplasm resources and agricultural environment. They also aim to deepen the two nations’ vocational education cooperation and make contributions to Pakistan’s modernization of agricultural machinery.
At the ceremony, Kang Ning, President of TMVTC expressed that the Luban Workshop program is going to launch one or two kinds of vocational training on the whole process mechanization operation of crops for young Pakistanis based on the nation’s agricultural automation development demand.
The vocational training of China’s Luban Workshop has enabled more and more young Pakistanis to participate in the process of globalization, said Afifa Shajia Awais, Education Attaché of the Embassy of Pakistan in China, at the World Vocational and Technical Education and Development Conference held in August 2022 in Tianjin China.
According to Kang, TMVTC has been engaged in the operation of Luban Workshop program in Pakistan since it was launched in July 2018. TMVTC has completed totally 3,200 teaching hours in Lahore Punjab so far. About 95 young Pakistanis have finished training on electric automatization and mechatronics. The program has been incorporated into G3 vocational training system in Punjab, Pakistan.
Pakistan needs millions of skilled people to industrialize itself, according to Afifa Shajia Awais.
The Luban Workshop is a Chinese vocational workshop program training talent overseas, a win-win model for international vocational education cooperation. The program is named after Lu Ban, an ancient Chinese woodcraft master.