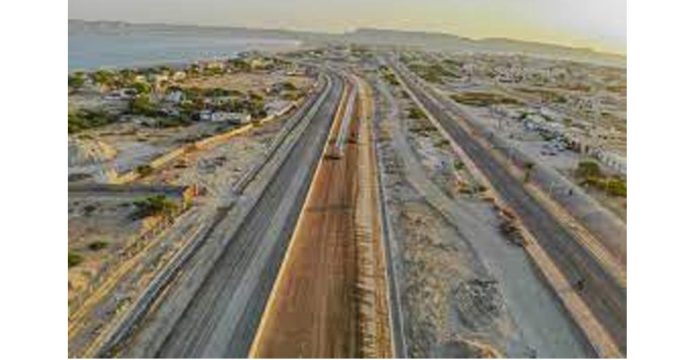 According to Lieutenant Colonel (Rtd.) Naveed Ahmad Shami who has been working with the project for about seven years, the Chinese used advanced technology, known as Revetment and Pilling Technology, and engineering for the first time in Pakistan.

He is the coordinator of the 19-kilometer-long Eastbay Expressway project and he is proud that almost 4 kilometers of the area is reclaimed from the sea by using this technology.

Shami revealed that the initial time for the project was about three years but they had to build three bridges for the fishermen.

Now the fishermen can cross the road easily and they can also transport their boats and luggage through these bridges. Although the project was delayed for one more year, this shows how much the Chinese are concerned about the facilitation of the local people.

The main aim of the Eastbay Expressway project is to ease the transportation of the heavily loaded cargoes from the port to the CPEC artery.

Although some elements tried to damage the project, fortunately, no mishap happened during the project due to the very tight security guards and around-the-clock security given by the Pakistani Army.

China has not only transferred technology and machinery for the development of Gwadar in particular and Pakistan in general, but also transferred it to the people of Pakistan in the most remote areas.

According to Naveed Shami, the Chinese have constructed training institutes all over the region. When an industry is developed, there will be the highest job opportunities for local people. During all these projects, Chinese companies will prefer local people like Baloch and local people from Gwadar. It is very right to say that it would be a game changer, said Naveed Shami.

It is a welcoming thing that the Chinese are making sincere efforts for the modernization and development of the local people. They have established vocational institutes and introduced 26 subjects for the locals which have more than 300 capacities.

They have boarding, lodging, and other systems which are not going to charge any money from the Pakistani government.

Shami is hopeful that the transfer of technology and skills will bring prosperity and development for the Pakistanis, especially for the people of Balochistan.