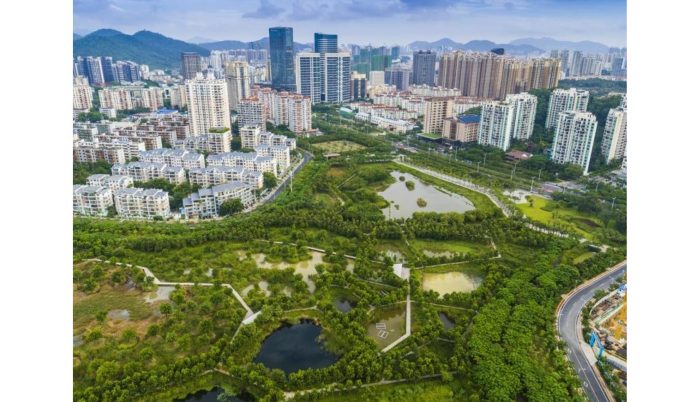 ISLAMABAD, July 16 (DNA): Adopting China’s sponge city model in major cities of Pakistan may reduce urban flooding by 90%, Gwadar Pro reported on Saturday.
The model may also help combat flooding, absorb carbon dioxide, increase animal and plant life, and expand green spaces.
Talking to Gwadar Pro, a senior official of Climate Change Joudat Ayaz said, “if the same model is adopted in Pakistan with the Chinese assistance it can help Pakistan prevent flooding in major cities of Pakistan.”
He noted, “the model can be started from Pakistan’s largest city of Karachi which is severely affected every year by urban flooding, especially during the monsoon season.”
The sponge city model aims to use pervious pavements, rain gardens, green roofs, urban wetlands, and other innovations to absorb water during storms. The soil then purifies that water and gradually releases it – much like a sponge.
Faced with worsening urban floods, cities in China are embracing nature and building what is termed “sponge cities.” Instead of relying on the “grey infrastructure” of levees, pipes, dams and channels, sponge cities allow urban areas to absorb water in times of high rainfall and release it in times of drought.
The 34-hectare ‘Qunli storm water park’ in the city of Harbin in northern China is one example of a successful sponge city. It collects, cleanses and stores stormwater, while also protecting the native natural habitat and providing a beautiful green public space for recreational use.
The government of Pakistan in the past adopted various strategies to avoid urban flooding including the installation of a rainwater harvesting system and the construction of large underground water tanks.
The first urban rainwater harvesting system was installed in the capital city of Islamabad in 2010 at the iconic Faisal Mosque to conserve 3 million litres of water.
On the other hand, in 2020 the Lahore city management launched its first underground water storage system to collect rainwater for reuse and reduce flooding in the city of over 11 million.
The Lahore Development Authority (LDA), in collaboration with its subsidiary Water and Sanitation Agency (WASA), developed the first rainwater storage in the city to recharge the depleting groundwater resources. So far 3 out of 22 underground tanks are constructed successfully.
Experts believe that climate change is the major cause of the heavier than average downpour in Pakistan. In the month of June- July, continuous rain in Pakistan has killed more than 150 people, triggering flash floods and affecting millions more.
The National Disaster Management Authority (NDMA) estimated that 91 women and children were among the dead. The rains have partially or fully damaged over 1000 houses, including five bridges, and power stations across the country.
The lower middle class and the poor have suffered the most from urban flooding in Pakistan, the report added.