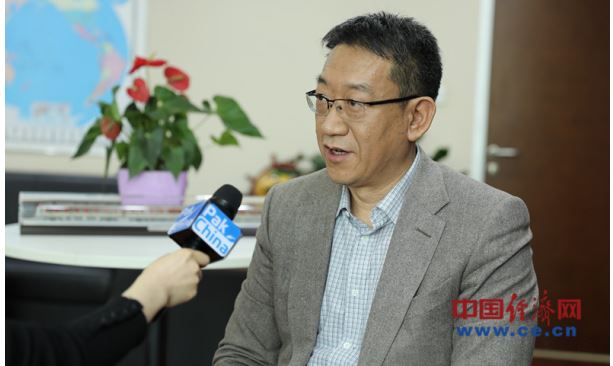 BEIJING, Nov. 2 (DNA): Viewed from above, the Orange Line Metro Train (OLMT) is winding through Lahore city like a shinning ribbon. “ The color of the Orange Line was inspired by the national flower of Pakistan, frangipani, which is lively, vibrant and gives people a warm feeling.

This was stated by Yuan Jun, President of NORINCO International in an interview to the Report of China Economic Net (CEN) Zhao Xiaopeng.

He added, “apart from the appearance, the design of the No. 13 station also absorbs the merits of Pakistan’s famous Mosques. The Orange Line’s whole design was a result of the cooperation between the Chinese and Pakistani companies.

Bearing in mind that Lahore is a historical city honored with rich culture, we take the style of local architectures, religions, and customs into consideration, hoping that the design could meet the requirements for functional use as well as improve the urban landscape.”

The Orange Line is the first metro line in Pakistan. It covers a total of 27 km distance and has 26 stations including 24 elevated stops and two underground stations.

The opening of Orange Line, now a new landmark of the city, has enabled Pakistan to have the most advanced urban rail transit operating system in South Asia.

“As the constructor of the program, we have adopted the most advanced technologies for the Orange Line. For example, the Communication Based Train Control System (CBTC) , which is the most superior of its kinds by far, can transmit data via wireless network and monitor the location of the train in real-time, ensuring the security and efficiency of operation,” Yuan told the reporter.

“Furthermore, to adapt to the high temperature and the capacity for power supply in Lahore, designers of the project have enhanced overall equipment in the electricity system and equipped emergency shutoff system to improve the endurance and security of the facilities as well as the ability to deal with emergent situations,” Yuan introduced.

Confronted with the challenges posed by the COVID-19 epidemic, the teams of China and Pakistan have collaborated with each other and successfully overcome several difficulties such as tight schedule for construction, the pressure of containing the virus spread, and shortage of workers in a short period of time.

Yuan said, “It’s difficult to employ a large number of local employees offline during the epidemic, so we adjusted our strategy in time and interviewed thousands of applicants by video to ensure the supply of personnel.

Besides, we produced hundreds of video training courseware and hired more than a dozen trainers that can speak Chinese, English and Urdu to help prepare our new employees for their work.

At the most critical stage of the project, we chartered a group of skilled Chinese drivers to Pakistan to ensure the operation and maintenance of the Orange Line. ”

The commercial operation of the Orange Line not only boosted the confidence of the local people in carrying out epidemic prevention and control and restoring economy, but also strengthened the determination of China and Pakistan to promote the construction of China-Pakistan Economic Corridor with high quality.

The Orange Line has injected impetus to the artery of Lahore city, bringing convenient, fast and green transportation system to 12 million people.

Statistics show that commuting time from the first station to the last station of Orange Line has been shortened from 2.5 hours to 45 minutes.

According to the local government’s calculation, the Orange Line project can save travel time in the first year of operation, creating direct income worth about Rs 9.29 billion rupees and saving driving cost by Rs 5.62 billion rupees every year.

During the construction of the “Orange Line” project, a total of 7,000 jobs were created for the Pakistani people, and 2,000 jobs will be created during the operation and maintenance.

Furthermore, a large number of professional and technical personnel will be trained for Pakistan by this project.

Referring to the NORINCO’s future plan in Pakistan, Yuan hinted, “ we are willing to undertake more projects under the CPEC umbrella and make contributions to the urbanization and industrialization of Pakistan.”