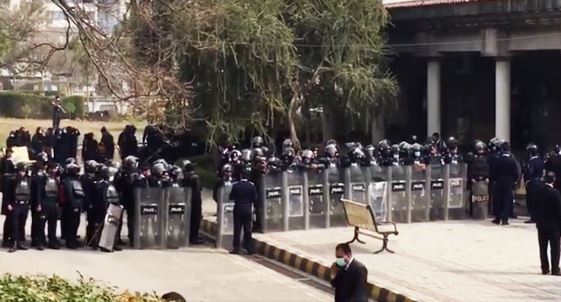 From Our Correspondent
PESHAWAR
All Pakistan PCS & PMS officers are extremely concerned about the happenings in KP where an awkward situation has been created due to mishandling of the events. We respect and safeguard the rights of all the citizens from all walks of life. During discharge of complicated administrative duties, at times unfortunate events occur which are not supposed to happen yet they are managed accordingly through various legal cum administrative measures.
In the instant case, an FIR was lodged against an AC unilaterally without getting approval of the provincial Govt. Even if any person or group is aggrieved there are E&D Rules for managing discipline of the civil servants. If such inquiry recommends any legal action, that is proceeded accordingly. Besides, attack on DC office who is principal representative of the state amounts to attack on state directly and must be discouraged in order to pre empt such acts in the future and stop further waning of the states’ writ.
Civil Servants are not against any group and respect is foremost in mutual relationships with all quarters. We appeal the Govt to resolve these matters, de-escalate such situations since the ultimate victims are general public in such tussles. Besides, all the Officers of KP be assured of future protection which includes regulatory force, civil admin Act, no FIR on any civil servant without approval of the CS and declaring them Justice of Peace on the analogy of other provinces.
If such protections are not guaranteed to the Civil servants, they won’t be able to perform their duties aptly and the same will result in diminished writ of the state & social disorder. We look upto the provincial government of KP to resolve the same. If not, PMS officers of other provinces will also join in accordingly for strengthening Rule of Law!!