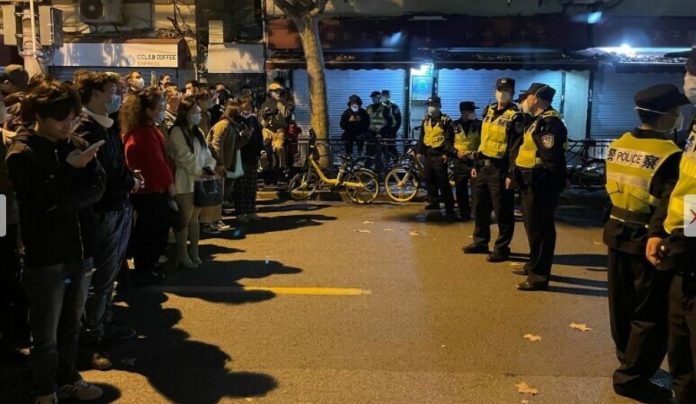 Shanghai: Hundreds of demonstrators and police clashed in Shanghai on Sunday night as protests over China’s stringent Covid restrictions flared for the third day and spread to several cities in the wake of a deadly apartment fire in the country’s far west.

The wave of civil disobedience is unprecedented in mainland China since President Xi Jinping assumed power a decade ago, as frustration mounts over his signature zero-Covid policy nearly three years into the pandemic. The Covid measures are also exacting a heavy toll on the world’s second-largest economy.

“I’m here because I love my country, but I don’t love my government … I want to be able to go out freely, but I can’t. Our Covid-19 policy is a game and is not based on science or reality,” said a protester in the financial hub named Shaun Xiao.

Protesters also took to the streets in the cities of Wuhan and Chengdu on Sunday. In Beijing, small gatherings held peaceful vigils, while students on numerous university campuses around China gathered to demonstrate over the weekend.

A fire on Thursday at a residential high-rise building in the city of Urumqi, capital of the Xinjiang region, triggered protests after videos of the incident posted on social media led to accusations that lockdowns were a factor in the blaze that killed 10 people.

Urumqi officials abruptly held a news conference in the early hours of Saturday to deny Covid measures had hampered escape and rescue efforts. Many of Urumqi’s four million residents have been under some of the country’s longest lockdowns, barred from leaving their homes for as long as 100 days.

On Sunday in Shanghai, police kept a heavy presence on Wulumuqi Road, which is named after Urumqi, where a candlelight vigil the day before turned into protests.

“We just want our basic human rights. We can’t leave our homes without getting a test. It was the accident in Xinjiang that pushed people too far,” said a 26-year-old protester in Shanghai who declined to be identified given the sensitivity of the matter.

“The people here aren’t violent, but the police are arresting them for no reason. They tried to grab me but the people all around me grabbed my arms so hard and pulled me back so I could escape.”

By Sunday evening, hundreds of people gathered in the area. Some jostled with police trying to disperse them. People held up blank sheets of paper as an expression of protest.

A Reuters witness saw police escorting people onto a bus which was later driven away through the crowd with a few dozen people on board.

On Saturday, the vigil in Shanghai for victims of the apartment fire turned into a protest against Covid curbs, with the crowd chanting calls for lockdowns to be lifted.

“Down with the Chinese Communist Party, down with Xi Jinping”, one large group chanted in the early hours of Sunday, according to witnesses and videos posted on social media, in a rare public protest against the country’s leadership.