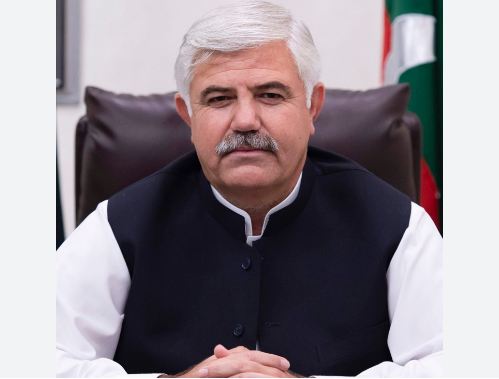 PESHAWAR, JAN 4 /DNA/ – Chief Minister Khyber Pakhtunkhwa Mahmood Khan on Wednesday paid a day long visit to district Swat where he participated as the chief guest in the passing out parade of the first batch of Khyber Pakhtunkhwa Tourism Police and distributed shields amongst the police personnel who achieved prominent positions in the training.

He also attended and addressed the Prize Distribution Ceremony of the Sports Festival 2022-23 which was held by the Elementary & Secondary Education department. 37 different games were organized in which 56000 students participated from all over the province.

The Chief Minister during his visit laid the foundation stone for the Khapal Kor Nursing & Health Science College which is being established under Khapal Kor Foundation. The provincial government has provided a grant of Rs 150 million for the project.

The Chief Minister also performed the groundbreaking of Paraplegic Center in Barikot. The project will be completed at an estimated cost of Rs 1.38 billion which will consist of 110 bedded ward, 40 private rooms, Physical Therapy OPD, Pathology Lab, Pharmacy, Pediatric Rehabilitation unit and other allied facilities.

He said that Imran Khan has gone all out to help and facilitate the venerable segment of the society. Shaukat Khan Hospital is no doubt a land mark achievement which is providing state of the art treatment facilities to the cancer patients. Besides, he launched Ehsaas program under which multiple welfare measures have been initiated.

Later on, in the passing out ceremony of the first batch of Tourism Police, the chief minister congratulated 173 passed-out police personnel and hoped that they will play proactive role in facilitating tourists in the province. The Chief Minister said that introducing Tourism Police Force is a unique initiative, with the purpose to provide a peaceful, safe and conducive environment to the tourists comming to Khyber Pakhtunkhwa.

He made it clear that the Tourism Police will be different from the traditional police adding that its basic responsibility is to protect tourists at tourist destinations.

Touching upon the other tourism related initiatives, the Chief Minister said that the provincial government is working to develop tourism as an industry. The steps undertaken by his government to this effect will not only attract national and international tourists towards the scenic sites of the province but also create employment opportunities for the local people and will also help in portraying the soft image of Khyber Pakhtunkhwa in the world.

Criticizing the poor policies of the incumbent federal government, the chief minister said that the current situation of law and order in Khyber Pakhtunkhwa is due to the incompetent imported government at centre. The Defense Minister of the Federal Government is a non-serious person who is criticizing our police and CTD just to cover up their incompetence and injustice.

He maintained that the imported government wants to create financial instability in the province by withholding our rights. The provincial government has completed many welfare projects including the successful completion of the merger of erstwhile FATA into Khyber Pakhtunkhwa. Erstwhile FATA was promised with Rs 100 billion budget per year to address their long standing deprivations but only Rs 5 billion have been released so far.

Mahmood Khan regretted that the imported government has withheld the funds of settled and merged districts which is blatant injustice with the people of Khyber Pakhtunkhwa. He said that the provincial government has to build universities, schools, infrastructure, police stations, communication networks and other facilities in the tribal districts. Apart from this, arms are also to be purchased for the police which cannot be done unless the federal government provides the due funds of Khyber Pakhtunkhwa.

He said that criticizing someone is easy but it is difficult to work practically.

“The current federal rulers have no concerns with peace or development”, he remarked and stated that they have come into government through regime change conspiracy with the only aim to serve alien interests and protect the looted wealth of the nation.

Addressing the prize distribution ceremony of the sports festival, the Chief Minister said that the provincial government has set all the departments and institutions on the path of development. We have not only taken steps to promote quality education, but have also paid special attention to the promotion of sports facilities in the province.