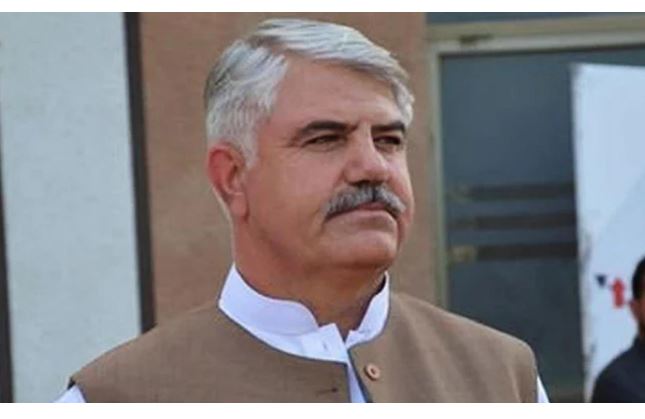 From Our Correspondent
PESHAWAR, MAY 30: A meeting to review overall law and order situation in the province was held here on Monday with Chief Minister Khyber Pakhtunkhwa Mahmood Khan in the chair. The meeting minutely discussed future course of action in order to prevent law & order incidents in the province and several important decisions were made to this end.Special Assistant to Chief Minister Barrister Muhammad Ali Saif, Chief Secretary Dr Shahzad Bangash, Inspector General of Police Muazzam Jah Ansari, Principal Secretary to CM Amjad Ali Khan, Secretary Home Khushal Khan, Commissioner Peshawar Riaz Mehsud, CCPO Peshawar Ijaz Khan and other Civil-Military high-ups attended the meeting. The meeting was given a detailed briefing about factors of law & order incidents and steps being taken by the law enforcement agencies to prevent such incidents. The meeting was told that during the last two weeks law enforcement agencies have achieved major achievements against miscreants. The participants were informed that the ratio of street crime has significantly decreased in the provincial capital since the Ababeel Force was established. The meeting on the occasion has decided to make more recruitments for the newly established Ababeel Force as well as to prepare way forward in order to effectively stop the cultivation of drugs in the certain parts of the province. The chief minister has directed the quarters concerned to chalk out comprehensive plan for providing alternate livelihood opportunities to the drug cultivators further directing them to have special focused on district Bajaur, Khyber and North Waziristan regarding law & order situation. He also directed the authorities to take curative steps against the target killing of security forces and officials of other law enforcing agencies in the province. He further directed to accelerate intelligence based actions against miscreants with special attention to the actions against drug mafia and extortionists adding that the provincial government will fulfill all the requirements of law enforcing agencies on priority. He further added that the actions taken by police and other law enforcing agencies against wrong doers and miscreants were appreciable however he said that more actions under an integrated strategy were also needed to effectively deal with the issues. He made it clear that law and order would be maintained by all means in the province and his government would not make any compromise to this end.