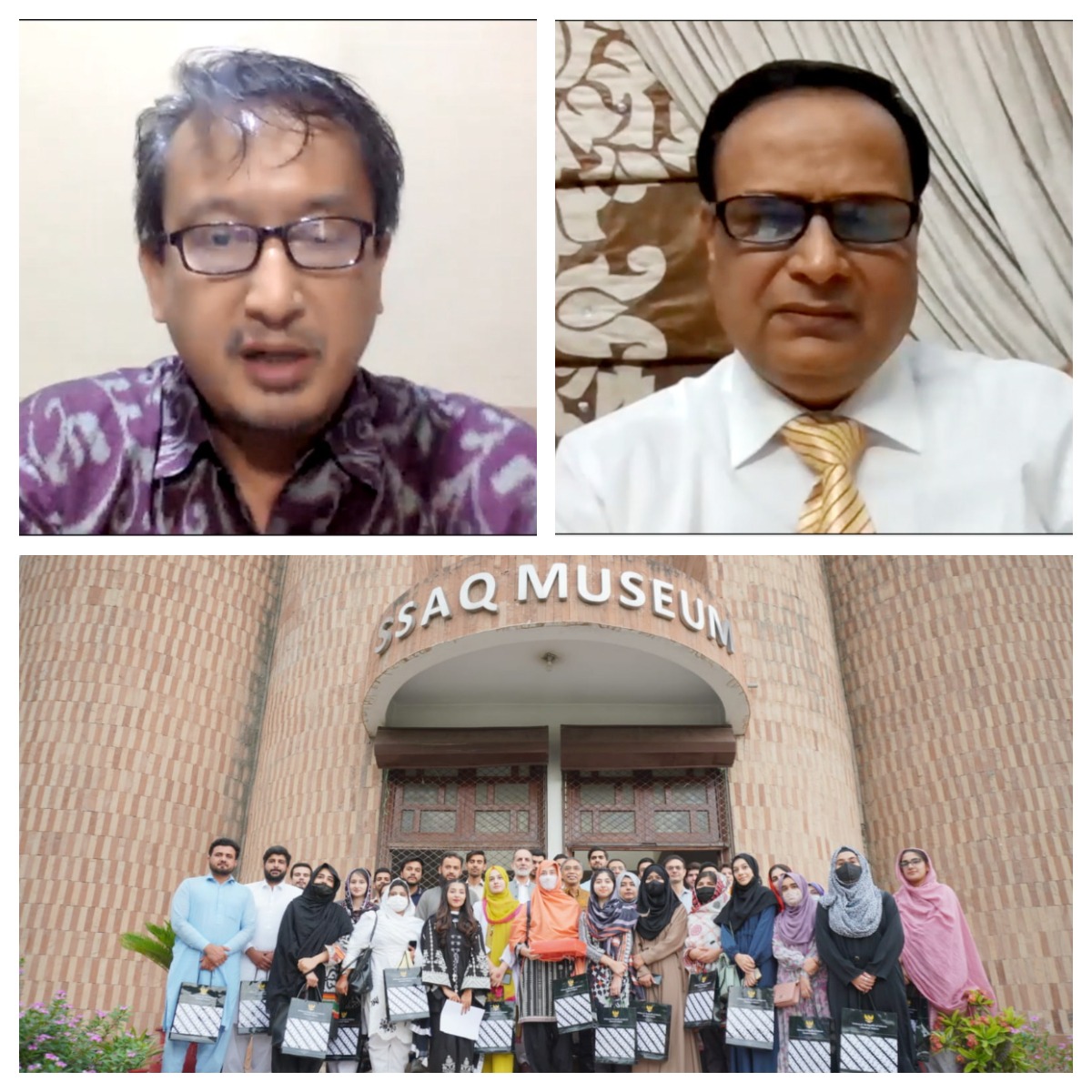 ISLAMABAD: The Online Internship Program on Contemporary Dynamics of Indonesia concluded with its final session featuring enlightening discussion on the holistic concepts of “Rahmatan Lil ‘Alamiin and Wasathiyah Islam”.

The month long Online Internship Program (OIP) was a joint collaboration of the Indonesian Embassy, Islamabad, and the University of Peshawar organized with the objective to augment improved understanding about modern Indonesia and highlight aptly the existing and emerging dimensions and potentials for the multifaceted bilateral cooperation development between Indonesia and Pakistan.

The OIP brought eminent panelists from diverse academic background and areas of specializations to share their in-depth and insightful perspectives and analysis on topics of mutual interest ranging from the challenges, achievements and transformations of the Indonesian society, success of ASEAN, Indonesia’s growing regional economic integration and the concepts of “Rahmatan Lil ‘Alamiin and Wasathiyah Islam” which was receiving growing audience in Indonesia and elsewhere in the Muslim societies.

Dr. Dicky Sofjan, Partnership & Networking Coordinator of the Indonesian Consortium for Religious Studies (ICRS), University of Gadjah Mada, Indonesia, was the guest speaker on this closing occasion. In his presentation on the session’s theme of “Redefining Islam as Rahmatan Lil ‘Alamiin and Wasathiyah Islam” the speaker said that the ICRS has been working with many Islamic scholars and intellectuals and also had international collaboration on inter religious studies.

Dr. Dicky Sofjan said that Indonesia was country of a mega biodiversity and was home to 700 psycholinguistic groups with rich and diverse culture and traditions. On Indonesia’s religious diversity the speaker Informed that Islam was the predominant religion in Indonesia and besides other recognized religions such as, Christianity, Hinduism, Buddhism and Confucianism there were over 400 local indigenous belief systems and spiritualism practiced in different parts of Indonesia. He explained that Indonesia was not an Islamic state but had “Pancasila” as its state ideology and the philosophical basis of the Indonesian state.

He observed that Muslims as a whole were confronted by many common challenges in the modern day and the questions being raised that why Muslims in general were economically, academically, technologically and democratically backward. Commenting on many theories, hypothesis and analysis on the issues of the Muslim societies, Dr. Dicky Sofjan pointed out that recent works by Muslim intellectuals identified the alliance between the clergy and the state as one of the reason for the underdevelopment of the Muslim societies in different parts of the world.

Discussing the phenomenon of the anti-Islamic sentiments he said that Islamophobia was rising due to the religious illiteracy and this was his motivation for his collaboration work with the Indonesian Ministry of Religious Affairs to develop religious literacy programs which primarily focused on not learning Islam but about learning religion and creating awareness that religion necessarily confronts the reality of economy, politics and international relations. He said that there were issues of discrimination, hate speech and stereotyping and the Muslim were generally seen with more tendencies towards extremism and terrorism giving a false notion of Islamic terrorism.

He informed that his institution has been working to develop the idea to bring forth the real face of Islam which was the Rahmatan Lil ‘Alamiin. He said that the Quran describes Prophet Muhammad as the mercy and blessings to the Multiverse who taught his followers to be grateful to God, be kind, generous and mindful of others and be strategic in their actions.

Further elaborating he stated we as human being, were not alone or living in an isolated island and hence had to be mindful of others as well and needed to be fully wary and cognizant of the reality of the day as we were living in the increasingly developing multicultural global society where we had engage with people having different world view on various issues including religion and salvation. He cautioned said that it was essential to be true faithful since it was easy to be nihilistic in ever increasing nihilistic world.

He emphasized that Muslim scholars and intellectuals needed to push boundaries of their knowledge and reminded that many Muslims with their talent and scientific knowledge laid the foundation of the many modern sciences that we had today. Discussing Islam Wasathiyah he said that it was important to draw the line as the Quran speaks of Islam as the way of life irrespective of the East or the West. He stressed that it was essential to understand the idea of Ad-deen since it encapsulated the whole world view that how we engage, interact, conceive and contribute to the world.

Sharing his thought on the occasion, Dr. Mehmood ul Hasan Khan said that the concept of Rahmatan Lil ‘Alamiin and Wasathiyah had become hot topic in Indonesia. He stated that the two concepts had multidimensional socio-economic, geo-politic and geo-strategic dividends and utilities. He informed that critical analysis reveals that the both concepts have certain aspects in international relations, diplomacy, peace and conflict studies, multiculturalism, human psychology and sociology. He also highlighted the potential of the two concepts in achieving the noble goals of peaceful coexistence, conflict resolution, well being of common people, rationality, wisdom, balance thinking, middle path, shunning of extreme positions, and controlling the distorted tendencies in the modern world.

He said that the comparative studies of Islam pinpoint that Rahmatan Lil ‘Alamiin concept first appeared in the Prophet Muhammad era itself and cited the Charter of Madinah as the start of the modern diplomacy in Islam.  He said that the fall of Makkah vividly reflected the true spirit of Rahmatan Lil ‘Alamiin and Wasathiyah Islam and the Prophet Muhammad efforts of liberation, protection and preservation touched the hearts of the people and ultimately the city of Makkah embraced Islam.

Indonesian Ambassador Adam M. Tugio who attended the final session at the University of Peshawar Campus said in his closing remarks that the exemplary bilateral relations between two countries did not merely depend on the governments nor could be viewed purely in diplomatic and economic terms, but the people-to-people contacts that covered interesting web of interrelationships and exchanges in numerous areas such as arts, history, heritage, culture, tourism, sports and education that played a very important role in promoting vitality of the bilateral relationship of the two countries.

He expressed his sincere gratitude to the eminent panelists from Indonesia for the very interesting and informative and enlightening discourse that featured the OIP sessions. He said that Indonesia as a case study offers many great thought provoking and learning experiences to the students, researchers and policy makers that how a country once gripped by multi-dimensional socio-economic and political crisis including those of ideology, ethnic, and separatist threats successfully managed to emerge as the 3rd biggest democratic country, the 13th biggest economy in the world and, moreover, was being admired for its freedom, pluralism and tolerance.

He paid his high indebtedness to the Vice Chancellor, University of Peshawar, Prof. Dr. Muhammad Idrees for his keen interest, hospitality and thorough support in successfully organizing the Online Internship Program. He also acknowledged Vice Chancellor’s dedicated team for their coordination and participation by the distinguished panelists from the University for sharing their expert views and perspectives at the OIP session, highlighting Pakistan’s various potentials, achievements and challenges and the students who made the OIP achieve its objective.