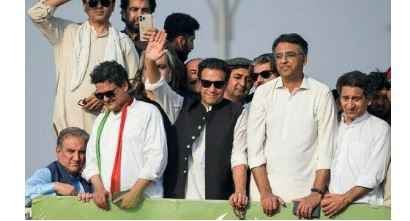 ISLAMABAD, NOV 16: In a detailed reply submitted to the Supreme Court in a contempt case on Wednesday, PTI chief Imran Khan maintained that he was not made aware of the apex court’s order of May 25 that defined the limits for his party’s ‘Azadi March’ at the time and as such, “has not knowingly violated” any of its orders.

Imran is facing contempt proceedings for allegedly flouting the top court’s order regarding the party’s march on May 25 in a plea filed by the interior ministry.

The ministry has stated in the plea that the apex court had directed the PTI to hold its ‘Azadi March’ gathering in a ground located between sectors H-9 and G-9. But, Imran and his supporters made their way towards D-Chowk in alleged contravention of court orders, the plea said.

At the previous hearing, the court had given the PTI chairman a second chance to explain the alleged flouting of court orders during the May 25 march. Previously, Imran had said that he was not aware of any undertaking submitted by his party on his behalf that the May 25 “Azadi March” would not proceed to D-Chowk.

In his response submitted today, Imran maintained he was not made aware of the “detailed contents of the verbal order made by this honourable court at about 6:05pm” on May 25.

He said after a perusal of the order, it was clear that the court had directed the interior ministry secretary, Islamabad and Punjab inspectors general of police and the Attock deputy commissioner to facilitate a meeting between the “designated PTI leadership in Islamabad”, including his counsel Babar Awan, and him.

“No such meeting was facilitated,” he said.

The PTI chairperson further stated that his statements on May 25 while addressing his supporters at 6:45pm and in the following two hours “reflected the communication of the verbal order received by him from political workers”.

He linked the communication lapse to jammers installed in his container for security purposes, saying the devices “make direct communication through cellular phones impractical.

“Any inadvertent overstepping his sincerely regretted.”

Assuring the court of having directed his party members to carry out political activities in a dignified manner, he contended that an incomplete recording of his statements made at Chach Interchange in Attock in May 25 was played in the court, and an incomplete transcript of the same was submitted.

Based on the information he had received, Imran said, he had “relayed to the people of Pakistan the good news that this honourable court had directed [the] removal of obstructions to the exercise of the constitutional rights of the people as regards to movement and assembly”.

He maintained he had “called upon families (women and children) to attend the protest gathering at D-Chowk in the sincere belief that such a gathering would be peaceful and not in violation of any order of this honourable court.”

Moreover, Imran added, that his cavalcade was subjected to “obstruction and intense tear gas shelling at the behest of the provincial government and other involved agencies” upon reaching Chach Interchange in Attock.

It was in view of this “continuing brutality” that Imran had called upon PTI supporters and members to assemble at “what is known as ‘D-Chowk, Islamabad’ in order to register a peaceful protest against the unconscionable and unconstitutional violence perpetrated by the state authorities,” the PTI chief explained.

He contended that the call for D-Chowk was meant for holding “an immediate protest against the unprovoked violence” and that it was distinct from the planned political assembly, the permission for which was sought at the ground between G-9 and H-9 sectors along with an assurance that the party won’t cause any obstruction in the city.

Imran went on that when his lawyer Faisal contacted Umar, the later was in Islamabad, adding that Umar instructions were to reiterate PTI’s right to hold a “peaceful assembly” in the capital. “Umar also expressed resolve that all the political activities held on the part of PTI would be peaceful.

However, he pointed out, the answering respondent could not be contacted because of jammers. The PTI chief also clarified that Umar’s instructions were consistent with the party policy.

“Umar travelled from Islamabad to Wali Interchange, near Mardan in a helicopter and joined Imran’s cavalcade at 3pm on May 25,” Imran said, adding that henceforth there was not contract between Umar and the PTI lawyers.

He added that the court passed verbal orders on May 25 which were not or could not be directly communicated to the PTI and the written order was only issued on May 26 — the day after the march.

“However, various news channels carried reports regarding the court’s orders between 6:05pm and 6:45pm. Some of these programmes/news bulletins were viewed by some individuals travelling in vehicles that were 50 or more yards behind the vehicle in which the respondent [Imran] was travelling. “

Imran said that some of these people tried to reach to him and conveyed the court’s orders “in general terms as reported by the media”.

“The gist of the communication was that the honourable court was pleased to order the removal of all restrictions placed by the state to entry into Islamabad by the members and supporters of PTI,” he highlighted, adding that the reports run by news channels didn’t mention any bar been imposed by the SC against protesting at the D-Chowk, hence leading to a “misunderstanding”.

Imran said that at that time he was also under extreme stress because of teargas shelling and violence perpetrated by the Punjab and federal authorities.

“The acts of violence that occurred during the evening of May 25 at various places in Islamabad were the consequences of state brutality and no act of violence was either intended or encouraged by the PTI,” the former premier contended.

He also clarified that the individuals who reacted to the violence did so in their own self-defence, adding that he had later called off the protest at D-Chowk for this reason alone.

“The reports filed on behalf of the ICT, the IB and the ISI contain references and presumptions not supported by facts,” Imran argued in his response, stating that he neither “flouted or disregarded” the orders passed by the apex court on May 25.

“It is respectfully submitted that the respondent remains committed to ensuring balance envisaged by the law and Constitution. There was no preplanned or organised resistance or reaction on the part of the respondent or the PTI to disproportionate violence and aggression that was deployed by the state.”

Imran also stressed that he remained committed to the rule of law and respect for the judiciary.

He then prayed that the case should be closed with the indulgence of the court.

The federal government, through the interior ministry, had approached the Supreme Court last week for initiating contempt of court proceedings against Imran for violating its May 25 order, wherein the PTI was restricted from holding its ‘Azadi March’ near Peshawar Mor between the H-9 and G-9 areas of Islamabad. However, Imran and his supporters made their way towards D-Chowk in alleged contravention of court orders.

According to the petition, the apex court had in its May order directed the PTI to hold a gathering on a ground located between sectors H-9 and G-9 in view of the categorical assurances on behalf of the party’s top leadership and their counsel that their rally would not cause any inconvenience or blockage of the Srinagar Highway or trouble the public and that the rally would be conducted in a peaceful and lawful manner.

Despite these assurances, the PTI top leadership, acting in blatant disregard for the directions, exhorted its supporters to reach D-Chowk, falsely professing that the court had allowed the march without any conditions, it added.

The contempt petition pleaded for the implementation of the apex court order for the protection of the fundamental rights of the public, particularly residents of Islamabad and Rawalpindi.

It also requested that the Supreme Court should also issue comprehensive guidelines for all future protests to be held in the federal capital that should include prior intimation of the date, selection of the venue, assurance of not causing any hindrance to public life and a commitment to ensure that the protesters would not cause any damage to public or private property.

The plea also claimed the tone and tenor adopted by the PTI chairman in his speeches against the incumbent rulers and state institutions was “highly inflammatory”, aimed at encouraging distrust and contempt and instigating revolt.

This had caused significant alarm not only among the public but also the international community and investors regarding the impact of this purported ‘jihad’, the petition claimed, adding the past conduct of the party head, especially the events of May 25 and his violation of court orders, his alleged encouragement of destruction of public and private property and disruption of law and order, merited strong directions from the apex court about his upcoming protests.