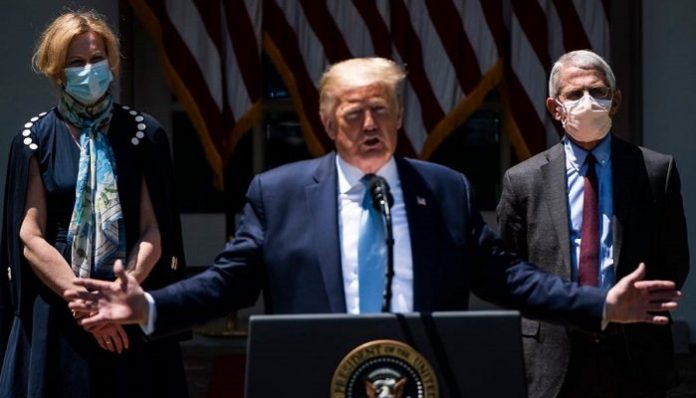 NEW YORK: The latest member of the US president’s inner circle or senior Republican to come down with the virus in recent days is Donald Trump’s press secretary Kayleigh McEnany who on Monday announced that she has contracted coronavirus.

McEnany on Twitter said that she had tested negative since Thursday, when the president tested positive, and had no symptoms. Indicating that she intended to work during her quarantine period, she said no journalists were listed on her contact tracing information as having been in close contact with her.

“Don’t tell anybody,” he reportedly told one close aide before he jetted off to a campaign fundraiser at his New Jersey resort, according to media reports. He also knew Hicks had tested positive and was feeling poorly. What’s more, McEnany briefed reporters that day from the White House briefing room.

In her statement, she denied knowing of Hicks’ diagnosis.

“Moreover, I definitively had no knowledge of Hope Hicks’ diagnosis prior to holding a White House press briefing on Thursday,” she wrote.

Hicks is one of the president’s closest aides. They reportedly talk multiple times a day and she often is a member of his traveling party.

McEnany revived somewhat regular White House briefings, but her quarantine period, typically 14 days, means updates on the president’s health will continue to come from his medical team and Chief of Staff Mark Meadows – even though they have contradicted each other and sown confusion for two days.

She has held press briefings with no mask, and gaggled with reporters while not wearing one on Sunday in the White House driveway.