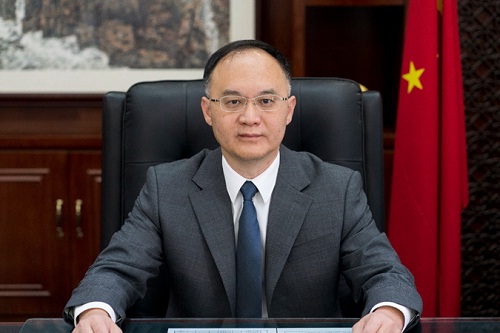 ISLAMABAD, Oct 11 (DNA):Ambassador of China to Pakistan Nong Rong Monday said that the projects under China Pakistan Economic Corridor (CPEC) were benefiting the local communities in Pakistan and providing thousands to jobs to them.

He said the power plants at Thar block-II had so far provided over 1838 jobs to the locals and hoped that more jobs would be created when the project would reach at peak construction period.

“Glad to learn that Thar Energy Limited and ThalNova Power Thar Limited (TEL&TNPTL) 2x330MW Power Plant Projects at Thar block-II have provided jobs to 1838 local people and will provide more jobs to locals for the peak period of construction”, he said in his tweet.

He said the TEL 330MW Power Plant Project in Thar Block-II was making steady progress by joint efforts of both Chinese and Pakistani staff.

Sound safety SOPs at the construction site are being strictly followed at the site while safety of all staff was also fully ensured.

According to official sources the power plant is currently under construction at Thar Coal Block II and is scheduled to achieve commercial operations in 2022.

The power project is a mine-mouth lignite-fired power Plant at Thar Block II and is one of the first power projects to utilize the local lignite at Thar Coal Block II for power generation.