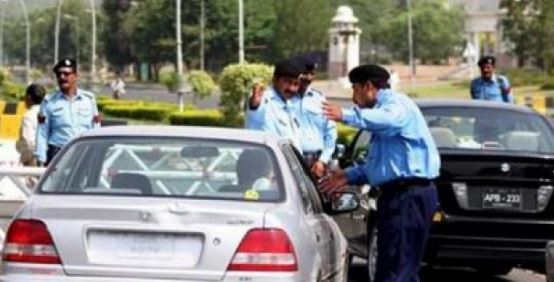 ISLAMABAD, Aug 20 (DNA): The campaign of Islamabad Capital Traffic Police (ICTP) to check violation of traffic rules was in full swing and special efforts were being made to maintain traffic discipline in the city.

The main objective of this road safety campaign was to ensure safety to people while road users were being educated for lane discipline during drive.

lane violation on various roads and ensure smooth flow of traffic in the city. Strict checking was being made against those not using helmets during bike ride.

SSP (Traffic) has appealed the citizens to cooperate with the force by following traffic laws. He said that action would be taken against those not following lanes during drive as the sole purpose is to ensure safe road environment in the city.

He hoped that citizens will follow traffic rules and help ICTP through their cooperation in ensuring secure traffic system in the city.

Those violating traffic rules would be fined and safer road environment would be ensured through constant monitoring, SSP (Traffic) Dr.Syed Mustafa Tanweer maintained.

The force issues traffic violation tickets not as a punitive measure but the purpose was to ensure safe road environment in the Capital and secure the lives of the people, the SSP (Traffic) added.