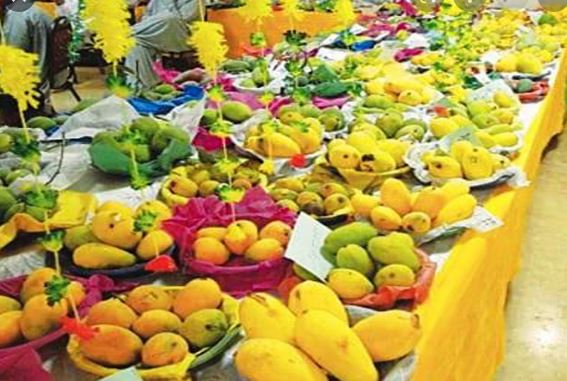 KARACHI, Jun 25 (DNA): The Diplomatic Business Club in the wake of its
regular events held its latest event entitled “Mango Festival with
Diplomats” at the Alliance Francaise, Karachi.

Muhammad Umar Shah, Chairman, DBC received the guests along with his
team.

The Festival was organized in collaboration with All Pakistan
Agriculture & Horticulture Forum and Pakistan Fruits & Vegetables
Exporters & Merchants Association and Roshan Enterprises.

The proceedings started with the recitation from the Holy Quran. That
followed by the opening speech from the Patron in Chief Mr Kaleem
Farooqui. After that other entrepreneurs and exporters expressed their
views about the export of Pakistani mangoes.

Mr. Shaikh Imtiaz Hussain, Chairman, All Pakistan Agriculture and
Horticulture Forum informed the audience that in 2021 the total mango
harvest of Pakistan was 1.8 million MTs while the exports were meager 7%
earning nearly US$100 million. This year the harvest is feared only 50%
due to unexpected high temperatures in April and shortage of water
supplies. However, we can still earn good foreign exchange if more
growers and exporters move toward global certifications, processing
units and exploring new domestic markets of the West instead of mainly
relying on Asian markets.

The live speech of Mr Luca Trombella, a European logistics expert from
the Netherlands was played on the screen about the strategy of exporting
Pakistani mangoes to the EU Mr. Trombella encouraged the Pakistani Mango
exporters to exploit the Netherlands as it serves as the hub of European
markets similar to flowers. In 2021 the Netherlands imported about 213
thousand MTs of Mangoes and exported almost similar quantity. The
re-export market of Netherlands is Germany, France, Belgium, UK and
other EU countries, local supermarkets of Netherlands demand Global GAP
and SMETA/SEDEX certification. Since South American countries fulfill
this requirement and manage whole year supplies, therefore, are the
major suppliers to the Netherlands. He ended the speech by amusing the
audience with the words of the Ambassador of Netherlands to Pakistan Mr
Wouter Plomp, “Pakistani aam dunya may behtreen hay” (Pakistani mangoes
are the best in the world).

One of the patrons of the DBC Mr Zeeshan Altaf Lohya also endorsed the
presence of the honorable guests and thanked them.

Only selected guests were invited besides diplomats and bonafide members
of the Diplomatic Business Club. The CGs and Vice CGs from Germany,
Turkey, Japan, Malaysia, Indonesia and Bangladesh were spotted, some
with their wives amongst the gentry at the event.

Progressive Mango growers from Mirpurkhas and Hyderabad also attended
the event. Commemorative shields were presented to a few diplomats and
honorable guests. A Mango guessing competition was held among lady
participants that was highly appreciated.

The guests were served with mango squash, raw cut mango, mango icecream,
shakes throughout the event and a sumptuous dinner at the end. Renowned
singer Mohammad Ali Shahki also appeared amongst the guests who took the
dias on demand. Later he joined a volunteer in rendiation of a popular
song, that was appreciated.

The guests were given mango packs before leaving from the event.