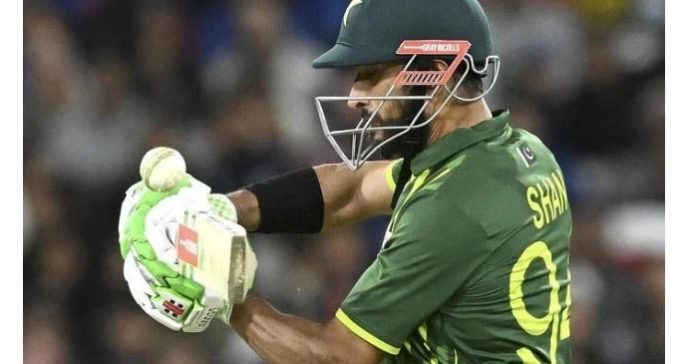 PERTH: Pakistan batsman Shan Masood warned that his “demoralised” side must pick themselves up quickly and keep believing if they are to salvage their fading Twenty20 World Cup dreams.

Pakistan suffered a shock one-run loss to Zimbabwe in Perth on Thursday, four days after they went down to arch-rivals India in their tournament opener in similarly agonising fashion.

One of the pre-tournament favourites, they now must win all their remaining games — starting with the Netherlands on Sunday — and hope other results go their way.

“We have three games that are in our hands, yes, we have to depend on few other results, but that’s the beauty of sport,” Masood, who made 44 before Zimbabwe choked Pakistan to 129-8, told reporters in Perth.

Their bowlers kept Zimbabwe down to 130-8, but Pakistan faltered in their chase with Pakistan-born Zimbabwe all-rounder Sikandar Raza taking three key wickets, including Masood, in the space of nine balls.

With 11 needed off the final over, Pakistan fell just short to hand Zimbabwe a famous victory.

“There is disappointment, no doubt. To lose two matches with fine margins is very demoralising as we know the importance of every point in this group,” Masood said.

“But till the tournament doesn’t end, we can’t think ahead and can’t look ahead. What we can do now is to find our mistakes and to win the next three matches.”

He added: “To overcome this disappointment we have to come out on the ground and play well. It’s only a good performance on Sunday that will help us feel better.”

Pakistan have largely depended on skipper Babar Azam and his opening partner Mohammad Rizwan to fire the team to victory.

Azam fell for four and Rizwan for 14 in the modest chase and the rest of the batting fell apart despite Masood’s 38-ball knock.

Masood said everyone needed to contribute.

“Our combination works around them and they are the world’s best batsmen — world’s top-five T20 batsmen. Other than that it’s everyone’s responsibility and I don’t think anybody will hide from the fact they did not finish their job.”

Masood had looked like guiding Pakistan to victory but Raza, with his finger spin, fired one down the leg side of the left-handed batsman who fell off balance in an attempt to flick the ball and was stumped.

It was a turning point in the game.

“I think I was in a decent position to finish the game,” he said.

“And I will take it upon myself — these are the games that you should win for your country, especially when you are the last standing main batsman.

“I am very disappointed.”