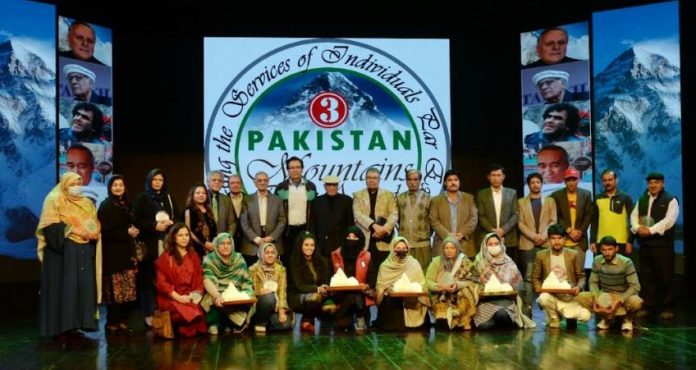 Talking about the objectives of the Pakistan Mountain Festival and Pakistan Mountains Pride Awards, Devcom-Pakistan Executive Director Munir Ahmed said: “Pakistan Mountains Pride Awards (PAMPA) were launched in 2019 to recognize the services par excellence of the individuals who have rendered their services to mountain conservation and uplift the communities over the decades, mountaineering, sustainable mountain tourism and for the promotion of mountain music. Before PAMPA, there was no system of recognition and encouragement to the marvelous people of mountains. The PAMPA was launched to fill the void, initially with five categories. PPAF has added four SMEs awards from this year that makes a total of sixteen awards.”

Speaking on the occasion, Nazir Sabir said: Some Pakistani women are showing courage in mountaineering, more shall join the flock. Sameena Baig, first and Niala Kiani both are internationally acclaimed mountaineers. Naila Kiani has become the first Pakistani woman to scale three peaks of over 8000 meters, as she climbed Gasherbrum 1 peak in August 2022 morning. Gasherbrum is the 11th highest mountain peak in the world.

Shoaib Sultan Khan said our rural support programmes have significantly contributed to the socioeconomic development of communities all over Pakistan especially in mountain areas. They do a wonderful job, and recognition of their services is much appreciated. It would encourage mountain communities, mountaineers and conservationists to do more in a much befitting manner.