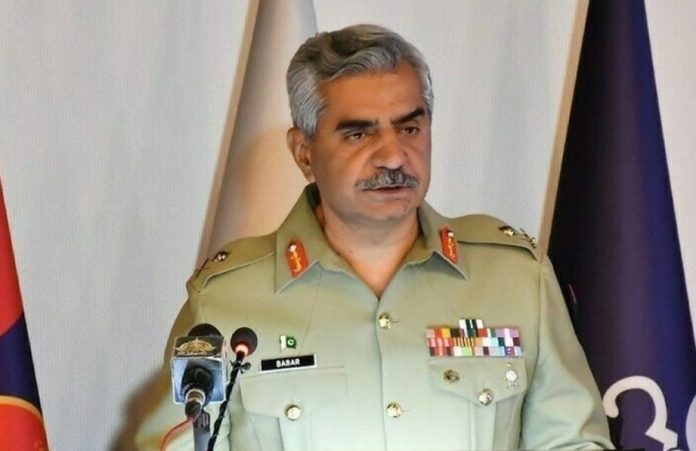 Inter-Services Public Relations (ISPR) Director General (DG) Major General Babar Iftikhar on Wednesday denied that his remarks from a day ago about there being no foreign conspiracy against the previous government were political in nature as he responded to PTI leaders’ objection to his rejection of party chairman Imran Khan’s claim.

In an interview with anchor Kamran Shahid on Dunya News show On the front on Tuesday, the DG ISPR had, not for the first time, rejected the conspiracy claim made by Imran, who insists he was ousted from the top office through a US-backed manoeuvre with the help of local players.

Regarding the first National Security Committee (NSC) meeting on the diplomatic cable at the centre of the conspiracy allegation that was held during Imran’s tenure, the DG ISPR had said it was attended by top military leadership and the participants were “clearly and in detail briefed by agencies that there is no kind of conspiracy or any evidence of it”.

His comments had provoked a response from PTI leaders Asad Umar and Shireen Mazari today who said the remarks were akin to wading into political matters and were more an “opinion” than a fact.A few hours after the press conference, the DG ISPR appeared on Hum News programme Breaking Point with Malick to respond. “I did not give a political statement. It was a clarification on behalf of services chiefs of Pakistan,” he said.

The DG ISPR said former interior minister Sheikh Rashid had claimed in a show last week that no services chief, in the NSC meeting on March 31, had said that a conspiracy did not happen.

“He (Rashid) was in a way [trying] to convey that he was talking as their representative,” the military spokesperson said. “That is why I felt it necessary to go in the same programme and clarify this on behalf of the services chiefs, since I’m their spokesman. There is nothing political to this.”

He reiterated that his explanation about the NSC meeting was a “clarification” and not at all political.

This is the reason, he explained, that the subsequent press release about the first NSC meeting had not mentioned any element of a conspiracy despite the PTI being in power at the time. “It can’t be said to be an opinion, it was a proper brief.”

“I don’t think I’ll be talking about this [whole matter] again,” he said.

The DG ISPR said he had no reservation about the formation of a judicial commission on the conspiracy claim, and the military and intelligence institutions would provide complete assistance to the government in whatever forum it decided to take the matter to its logical conclusion.