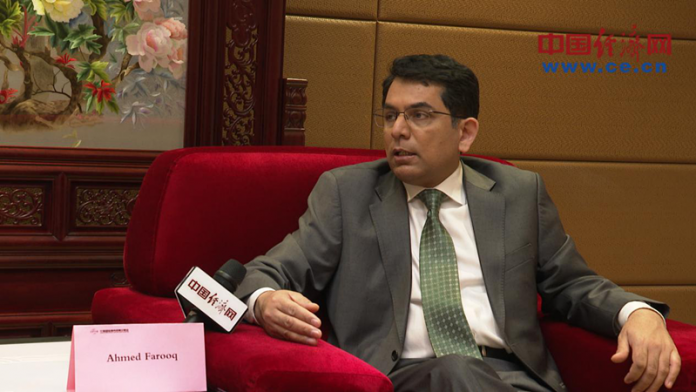 BEIJING, Sept. 10 -“There is immense potential for digital trade between Pakistan and China as the former is actually moving towards digitalization, and the China International Fair for Trade in Service (CIFTIS) provides an opportunity for the BRI countries to really look into the prospect,” said Deputy Chief of Mission (DCM) of Pakistan to China Ahmed Farooq in an interview with China Economic Net (CEN).The CIFTIS held from September 5 to 9 is the largest comprehensive exhibition in the field of global trade in services in China.The event organized under the background of global economic recovery is meant to provide opportunities for international businesses together online and offline and facilitate cooperation.

Addressing a session of Belt and Road Digital Trade under the fair, Ahmed said the CIFTIS is conducive to restoring economic vitality, improving trade connectivity, and facilitating the development of digital trade in the region.While talking about digital development in Pakistan, Ahmed noted it holds a bright future especially in the post-pandemic era when offline business is undermined and online becomes the trend.The size of the population is very critical to digitalization as well. Pakistan is a country with 220 million people and around two-thirds of the population is below 30 years old, an energetic group always interested in new things and more adaptable to transformation.The society as a whole is also taking incremental steps to accept those changes brought about by digitalization, including e-commerce, digital payment, online education, etc.Besides, the government is also keen on promoting the Digital Pakistan policy, in view of millions of new jobs expected to be created from economic growth due to digitalization.“Pakistan also has immense potential for developing tourism. With the potential of China’s outbound tourism and the special bond between Pakistan and China, there will be plenty of cooperation opportunities between the two countries after the epidemic,” Ahmed said.Blessed with diversified geography from snow-clad mountains to deserts to the uncharted sea, Pakistan is home to 108 peaks above 7,000 meters, as well as more than a 1000 km long serene coastline with sandy and sunny beaches.Pakistan is honored with historical sites of Indus valley civilization that can trace back to 4000 years ago and preserves hundreds of  Buddhist heritage sites.“Be it digitalization of Pakistan or tourism, CPEC will continue to play a part in driving their development as it did in the infrastructure sector,” Ahmed noted.CPEC is moving towards the second phase with a human-centric approach, and the areas of food security, vocational training, job creation, and health sector and others are expected to improve the well-being of the people, he added.

The aim of the Roundtable within the Festival was to listen, from PPAF and other key actors of the Italian-financed and...
Read more

The aim of the Roundtable within the Festival was to listen, from PPAF and other key actors of the Italian-financed and...
Read more