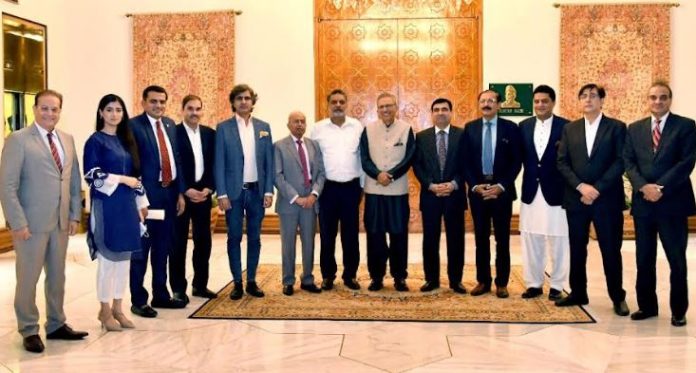 Dr. Arif Alvi says his relations with the sitting govt fine;  clarifies that he  received 74 summaries out of which he had singed 69 within no time. He did not sign four summaries that mainly pertained to the NAB laws and the Electronic Voting Machines

ISLAMABAD: President Arif Alvi on Tuesday said that no party had clear mandate therefore in order to evolve a consensus the stakeholders should either sit and talk or go for early elections. That was the only way to end uncertainty and overcome economic issues.

The President expressed these views during an interaction with the senior journalists, at a luncheon meeting. The President answered questions for at least two hours.

President Alvi further said by dissolving the National Assembly on the advice of the then Prime Minister, he in fact had acted as per the provisions of the Constitution. After getting such an advice he was bound to act.

To a question about the 58 8 2 B, according to which the Presidents could dissolve the assemblies, the President said he personally was not in favour of investing so much powers in one person therefore it was good decision to do away with the 58 2 B.

To a question he said that it was not a bad idea to appoint the next chief of army staff before the time fixed for appointment. The president was asked what he thinks of the suggestion that the new army chief be appointed in advance due to the ongoing political crisis in the country.

President Alvi said that it is suggested he “play his part” after meeting the army, naval or air chiefs, which he “cannot do” because this kind of initiative should be a two-way initiative. He added, it is possible for him to call a meeting of the services chiefs or meet them individually as being the supreme commander of the armed forces of Pakistan, nevertheless he thinks this kind of interaction may not help at this particular juncture.

He said that a dialogue is possible only when all the stakeholders agree. “The President House can play its role only in this case.””The neutrals need to remain neutral always,” the president said.

Moving on to the current situation in the top courts, Alvi said that he regrets that such an atmosphere has been created. “I had appreciated the houbara bustard ruling by Justice Qazi Faez Isa,” he said, adding: “I don’t want to create controversy again and again.”

To yet another questions about Qazi Faez Isa reference, the President said he received the reference from the Prime Minister and simply forwarded it to the Supreme Judicial Council for further investigation. “As a President I do not have authority of means to investigate such matters by myself’, he added.

When asked to comment on his working relationship with the incumbent government and especially the Prime Minister, the President said he had no problems whatsoever while working with the government. He dispelled the impression as if he were trying to deliberately delay summaries forwarded to him by the government.

He said so far had received 74 summaries out of which he had singed 69 within no time. He did not sign four summaries that mainly pertained to the NAB laws and the Electronic Voting Machines. He returned those summaries with his comments and regrets that his conscience did not allow him to sign those summaries.

To a yet another question whether he will ask the Prime Minister Shehbaz Sharif to take a vote of confidence under the prevailing political scenario, the President said he had no such plans.

He said we need to have good relations with the international community including the United States of America, Europe and other countries.

The President called upon the media fraternity to play its role in defusing the tense situation Pakistani was in these days. He said the objective criticism is always welcomed and as a matter of fact it really helps in many ways.