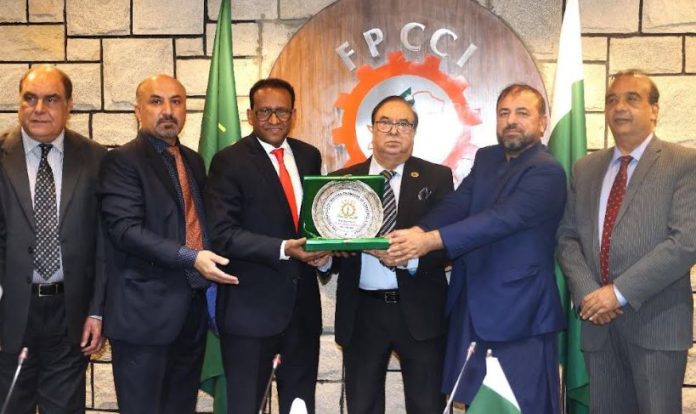 ISLAMABAD: Ambassador Extraordinary and Plenipotentiary of the Federal Democratic Republic of Ethiopia to the Islamic Republic of Pakistan Jemal Beker Abdula on Friday said concerted efforts were underway to establish institutional linkages between Ethiopia and Pakistan which were crucial to boost the already flourishing ties and bilateral trade between the two brotherly countries.

Addressing the business community from across the country here at the Federation of Pakistan Chambers of Commerce & Industry office, he said efforts were afoot to sign accords between the trading organizations of both countries to ensure bilateral trade under a legal system.

“Our government is strongly looking forward to building a strong relationship with Pakistan, which is located in a very important region and has major economies in its neighborhood,” he remarked.

“We have identified the products which will be exported to my country from Pakistan. Pakistani business community can contribute to Pakistan’s economic development by exporting rice, pharmaceutical products, medical equipment, sports items and construction material to my country,” he added.

Moreover, the Government of Pakistan, he said, could import agricultural products such as coffee, tea, pulses, oilseeds and vegetables from Ethiopia, which “will eventually help it meet the growing demand for edible items.”

He said his mission was planning to organize a visit of Pakistani business delegation to his country by the beginning of the 2023. “This visit is solely dedicated to Pakistan to help its businesspersons explore, understand and connect with the business community of Ethiopia.”

“I can assure Pakistan investors that their investment in Ethiopia will be protected by the government and will also have an international guarantee as my country is a member of the Multilateral Investment Guarantee Agency,” H.E. Jemal Beker said.

“The government of Ethiopia is taking multiple steps to facilitate foreign investment in our country. Prime Minister Abiy Ahmed chairs a meeting of the Board of Investment every two months to address the challenges faced by investors in our country,” the envoy added.

He also announced that the Ethiopian Airlines would start its operation in Pakistan soon and it was likely that the first business delegation would fly to Ethiopia in its maiden flight to his country.

The ambassador said Ethiopia had undergone a lot of reforms under the visionary leadership of Prime Minister H.E. Dr Abiy Ali Ahmed who has been working tirelessly and selflessly to make Ethiopia a symbol and beacon of prosperity in Africa.

He said Ethiopia was all set to become manufacturing hub in Africa as 96.4 percent of energy was being produced from the cheapest source i.e. hydro energy. Ethiopia has already been exporting clean energy to Djibouti, Kenya and Sudan. Export of the cheapest energy to many other regional countries is underway advance interconnectivity through energy.

“Information and Communications Technology (ICT) is another major sector in which Ethiopia is making strides with the development of a technology transformation road map, innovation ecosystem and conducive technology center,” he added.

On the other hand, the business communities from various Chambers under the auspices of Federation of Pakistan Chamber of Commerce and Industry expressed their commitment and readiness to explore and harness the availed opportunities in Ethiopia-Land of Origin.