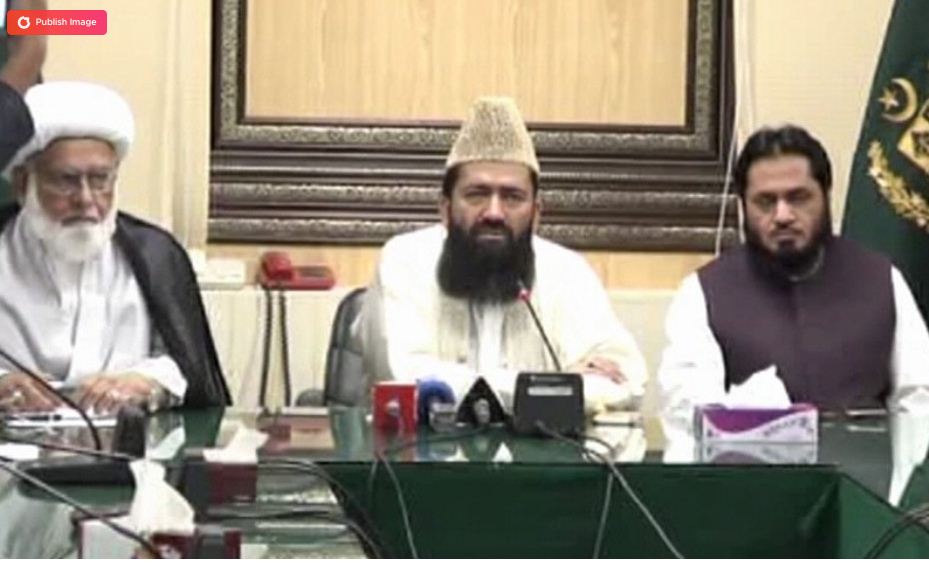 ISLAMABAD – The Central Ruet-i-Hilal Committee late on Wednesday announced the sighting of moon for the month of Shawwal, saying Eidul Fitr will be celebrated across Pakistan tomorrow (Thursday).

The meeting, which lasted more than four hours, was chaired by its chairman Maulana Abdul Khabeer Azad, while representatives of the Ministry of Science and Technology and the Meteorological Department were also in attendance.

Separate meetings of zonal and district Ruet committees were also held at their respective regional headquarters.

According to reports, there have been a few alleged sightings from Swabi in Khyber Pakhtunkhwa and Balochistan’s Dasht and Turbat areas. The Ruet committee was reviewing the veracity of the claims.

“More than 175 moon-sighting testimonies were received from different areas of the province; we checked and confirmed the testimonials,” Popalzai told media, adding that the testimonies had been forwarded to the central Ruet committee as well.

In Quetta, zonal Ruet committee member Qari Abdul Hafeez said the body had not received any authentic moon-sighting testimonies from the Balochistan capital.

Addressing a press conference after the committee’s meeting, while unverified reports were being received from Chaman, Zhob, Pasni and other areas of the province. He requested the central Ruet committee to review the testimonies received from Balochistan and take a decision.

Special Assistant to Prime Minister on Interfaith Harmony and Middle East Affairs Hafiz Tahir Mehmood Ashrafi called upon the public to wait for the Ruet committee’s announcement, saying the body will make a decision according to Sharia.

Meanwhile, Minister for Information Fawad Chaudhry, who previously served as the science and technology minister, said the age of the new moon was only 13 hours and 42 minutes in Pakistan due to which it was “impossible” to sight the crescent today.

Earlier, in an attempt to ensure that Eidul Fitr is celebrated the same day across the country this year, Ruet-i-Hilal Committee members had approached and tried to persuade the clerics who have publicly opposed the announcement related to Shawwal moon-sighting by the national body in the past.

“We are engaged with clerics of all schools of thought and various groups, involving them in the process,” Maulana Azad had told Dawn, recalling that the management of Peshawar’s Qasim Ali Khan mosque, where Mufti Shahabuddin Popalzai heads the local unofficial moon-sighting committee, had also observed Ramazan with the rest of the nation.

“I am sure they will respect the decision of the Ruet-i-Hilal Committee over Shawwal moon too,” he added.

However, some committee members had expressed concerns over what they called the premature statements by Information Minister Chaudhry regarding the expected date of Eid.

In a tweet on Sunday, Chaudhry had said: “Although the final Eid announcement will be made by the Ruet-i-Hilal Committee, according to the calendar and Ruet App developed by the [science ministry] the moon will be able to be sighted on May 13 and Eid will be on May 14 (Friday).”

Several committee members had registered concerns to the Ruet-i-Hilal Committee chairman that such statements by the minister would only encourage clerics such as Mufti Popalzai of Peshawar to continue to undermine the authority of the committee this year too.

This year’s Eid comes as Pakistan struggles to contain a third wave of coronavirus infections, with more than 850,000 cases and 19,000 deaths declared and only a fraction of the population having been vaccinated.

The country is currently under a partial lockdown after the National Command and Operation Centre (NCOC) last month announced a ‘Stay Home, Stay Safe’ strategy from May 8 to May 16 aimed at controlling the movement of people during the Eidul Fitr holidays.

There will be a ban on Chand Raat bazaars, including mehndi, jewellery/ornaments and clothing stalls. There will be a complete ban on tourism for both locals and outsiders. All tourist resorts, formal and informal picnic spots, public parks, shopping malls, hotels and restaurants at picnic places will remain closed during Eid holidays.

Interprovincial, intercity and intra-city public transport will also remain suspended, while private vehicles, taxies/cabs and rickshaws will operate at 50 per cent occupancy.

The electronic media has been advised to run movies, dramas and shows to keep people entertained at home. Moreover, uninterrupted supply of electricity will be ensured during the Eid holidays.