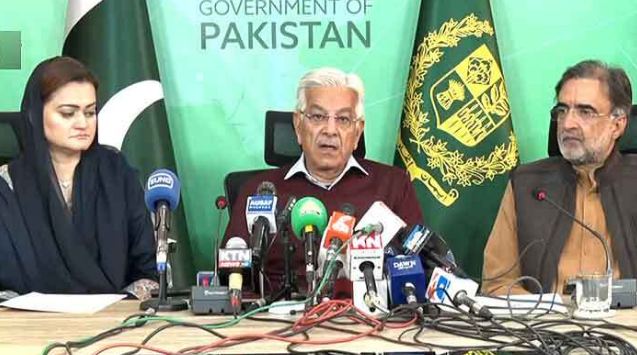 ISLAMABAD: The federal government on Tuesday unveiled its energy conservation plan, according to which all the markets and restaurants will be shut down at 8pm.

Speaking during a press conference after the cabinet meeting, Defence Minister Khawaja Asif said that the wedding halls will be closed at 10pm.

The timings of the restaurants may be extended an hour or so, he added.

“If 20% of the workers are sent to work from home on a rotational basis, this will save Rs56 billion,” said the minister.

The minister also shared that the federal government was recommending switching street lights on alternately which will save about Rs4 billion.

The minister said that the government is reaching out to all four provinces to inform them about the policy and take them on board. He said that it is a National Energy Conservation Plan and will be launched with consensus.

Asif added that this plan will be finalised on Thursday after consultations with the rest of the provinces.

Asif said that the country cannot afford the current living conditions as it is going through a serious economic situation.

“We need to change our habits if we want to live within our means,” said the defence minister. Asif said that billions of rupees can be saved by conserving energy through different sources.

“Austerity will become a part of our nation which will end the economic problems,” he said.

Meanwhile, Adviser to PM Qamar Zaman Kaira assured that Pakistan will not default. He urged the people to accept the government’s policy.

“The biggest issue of Pakistan is the import bill which is $26 to $28 billion and it keeps increasing. There is no other option for us than to take these steps and the nation will have to cooperate with the government,” said Kaira.

Last week, sources had told that the government without allowing an upward revision in electricity and gas tariffs had directed the relevant authorities to come up with viable plans to reduce the monster of circular debt that had now peaked at Rs4 trillion.

However, without pricing adjustments, the International Monetary Fund (IMF) has rejected the initial plan for slashing the circular debt shared by Pakistani authorities with them in recent days because the Fund wants cost recovery of electricity and gas generation sectors.

Sources had told that Finance Minister Ishaq Dar chaired a high-level meeting to deliberate upon the cash-bleeding energy sector to prepare a plan for slashing down the circular debt, which will be presented to Prime Minister Shehbaz Sharif for approval.

Afterwards, this revised-updated plan will be shared with the IMF. But the meeting with PM was postponed.

The IMF high-ups assured the Pakistani authorities that they would continue holding virtual meetings during the Christmas holidays and Pakistani authorities were assigned to come up with a viable plan to erase the circular debt. The IMF had expressed its annoyance that the circular debt of the power sector had not shown improvements sought on the occasion of completion of the 7th and 8th reviews under the Extended Fund Facility (EFF) programme. The IMF’s displeasure further grew when the circular debt of the gas sector jacked up to Rs1,600 billion.