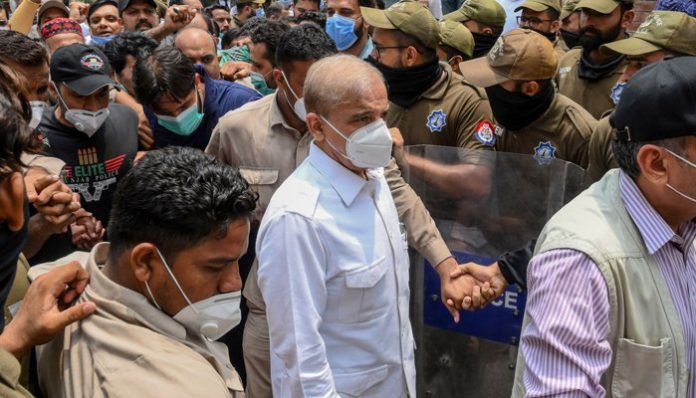 LAHORE: A special court hearing the Rs16 billion money laundering case against Prime Minister Shehbaz Sharif and his son, Punjab Chief Minister Hamza Shehbaz, was told by the former on Saturday that it is a “pack of lies” and “will be buried”.

PM Shehbaz and his son were summoned in court today for questioning  with the prosecutors having concluded their arguments against an extension in interim bail, which the two have sought.

A report will be submitted regarding non-bailable arrest warrants for the father-son duo.

In his plea, PM Shehbaz stated: “I am obliged to inform the court of the truth regarding my bail.”

He stated that the case by the Federal Investigation Agency (FIA) is identical to that being pursued by the National Accountability Bureau (NAB).

“The Ashiana [Housing Scheme] and Ramzan Sugar Mills cases were built against me,” said Shehbaz.

“You have no ownership of them?” asked the judge.

“I have no share in either,” PM Shehbaz responded, adding that in the Ashiana case, he was accused of the misuse of his authority as chief minister.

“NAB moved the Supreme Court against me, despite the fact that the Lahore High Court had issued a detailed verdict in my case,” he said.

He said that the then chief justice had also asked for proof of corruption against him.

PM Shehbaz went on to state: “The FIA visited me twice when I was in NAB detention, but I refused to answer without my attorney’s input.”

He said that NAB “panicked and fled” from there, while the FIA was provided with all the facts verbally.

“My cases were decided on their merit, and I emerged clean,” he remarked.

The premier added that a man’s honour is his greatest asset and that “severe” allegations have been made against him.

“I faced countless hearings and trials. The FIA was admonished for not presenting a challan. I believe the FIA was preparing for an arrest, hence the challan was delayed,” he added.

He reiterated that he is neither a director nor a stakeholder of the Ramzan Sugar Mills.

PM Shehbaz continued: “[All this] harmed the family’s sugar mills. Why would I engage in corruption and money laundering and harm the family business?”

He said that he “had the legal right to grant the business a subsidy”.

“The entire case is built on lies and will be buried,” PM Shehbaz said.

For his part, attorney Amjad Pervez stated that the fact that Shehbaz Sharif and Hamza Shehbaz had previously been interrogated in jail by the FIA was sufficient proof for their bail and that no further evidence could be presented.

The court asked the FIA if bankers were called as witnesses in the investigation, and the FIA prosecutor, Farooq Bajwa, said that they were not.

He said: “I would not state anything that is not a part of the records. The entire matter has been presented to the court.”

“I will speak in accordance with the law, I will not simply oppose him as a prosecutor,” said Bajwa. “When the FIA made this case, there was no direct investigation.”

The FIA prosecutor added: “I would not engage in such trickery for which I have no explanation.”

He said that “these are political figures”, and that “such is the evidence collected when such cases are opened”.

It is pertinent to mention here that the special court in Lahore had summoned the father-son duo for their indictment in the case in April but it was deferred due to the premier’s foreign engagements.

In December 2021, the FIA had submitted a challan against Shehbaz and Hamza to the special court for their alleged involvement in laundering Rs16 billion in a sugar scam.

According to the FIA report submitted to the court, the investigation team “detected 28 benami accounts of the Shehbaz family through which money laundering of Rs16.3bn was committed from 2008-18. The FIA examined a money trail of 17,000 credit transactions.”

The report added that the amount was kept in “hidden accounts” and “given to Shehbaz in a personal capacity”.

This amount (Rs16 billion) has nothing to do with the sugar business (of Shehbaz’s family), it claimed. The money allegedly received from the accounts of low-wage employees was transferred outside Pakistan via hundi/hawala networks, ultimately destined for the beneficial use of his family members, the FIA had said.