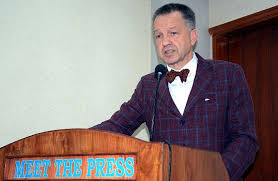 ISLAMABAD, MAR 7 (DA) – – German ambassador to Pakistan Bernhard Schlagheck has said that economic ties of Pakistan and Germany are very strong, stressing the need for technology transfer to establish joint ventures so that exports could be enhanced by producing value-added products in the country.

While talking to a delegation of APBF, the ambassador expressed his optimism over extension in GSP Plus status, saying continuation in duties’ relaxation for Pakistan would further improve its exports to EU countries, including Germany.

He said that Pakistan and Germany’s bilateral trade has been around 3 billion Euros while trade balance is also in favour of Pakistan.

The ambassador vowed to play his effective role in improving the trade relations between the two countries.

He also emphasized that the biggest asset of Pakistan lies in its abundant youthful workforce. If they are trained and educated well by the governments, this workforce could be the main strength in Pakistan’s industrial development.

Bernhard Schlagheck said that Germany wanted to further enhance trade relations with Pakistan and added that German delegations are scheduled to visit Pakistan to explore business collaborations with Pakistani counterparts. He said that over 280 Pakistani companies participated in the Heimtextil 2020 International Trade Fair held recently in Frankfurt, which was a record participation and added that companies of both countries should actively participate in each other’s trade fairs to further enhance bilateral trade and business relations.

APBF President Syed Maaz Mahmood, on this occasion, outlined the business and investment opportunities in Pakistan.

He asked German investors to take benefit of these opportunities by investing in Pakistan. He cited IT and pharmaceutical sectors as the other potential areas for cooperation between the two countries.

He said that the All Pakistan Business Forum (APBF) will extend full cooperation and support to strengthen trade and economic ties between Pakistan and Germany.

He informed that APBF has made numerous valuable contributions towards the progress and growth of the national economy.

“We are making consistent efforts to identify and engage resourceful organizations and entrepreneurs to create new opportunities and mutual benefits through our shared values and wisdom.”DNA