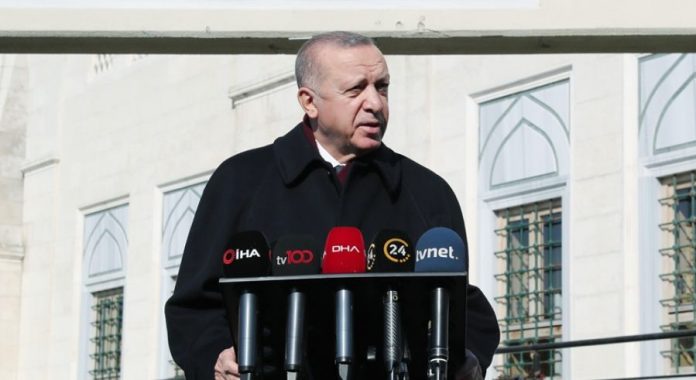 ISTANBUL, FEB 5 – Turkey’s president strongly criticized the US and France over their statement condemning the protest at Istanbul’s Bogazici University.

“What does America or the European Union say? ‘We condemn what happened at Bogazici University.’ Well, I’m saying this to the US: ‘In the name of democracy, do you not feel any shame over the events that took place in America shortly before elections?’,” Recep Tayyip Erdogan told reporters after Friday prayer.

The protests erupted in Istanbul against the recent appointment of Bogazici University’s new rector, Mehmet Bulu, with a group of students calling for his resignation.

Demonstrations intensified when two Bogazici University students were remanded in custody by a Turkish court for displaying a painting allegedly offensive to Islamic values on university grounds.

On Tuesday, Turkish Interior Minister Suleyman Soylu said nearly 80 of those recently arrested amid ongoing protests are members of far-left terror groups, including the DHKP/C and TKP-ML.

Recalling incidents in the US prior to presidential elections, Erdogan said: “How did everyone threaten each other during the events there, how racism was at the highest. How did the cops kill your Black citizens. How would you explain that to the world?”

Erdogan also slammed the French president over his comments on protests at Bogazici University.

He said the opposition groups are going all out to complicate matters, however these university protests will not culminate into the infamous Gezi Park incidents.

“This matter will not become another Gezi Park protest. That’s why all of our law enforcement agencies take necessary steps with determination.”

In the summer of 2013, a small number of demonstrations in Istanbul’s Gezi Park grew into a nationwide wave of protests against the government that left eight protesters and a police officer dead.

The government later said the protests were orchestrated by FETO terror group members, who had infiltrated the police and courts.

FETO and its US-based leader Fetullah Gulen orchestrated the defeated coup of July 15, 2016, which left 251 people martyred and nearly 2,200 injured.

Turkey accuses FETO of a long-running campaign to overthrow the state through the infiltration of Turkish institutions, particularly the military, police, and judiciary.