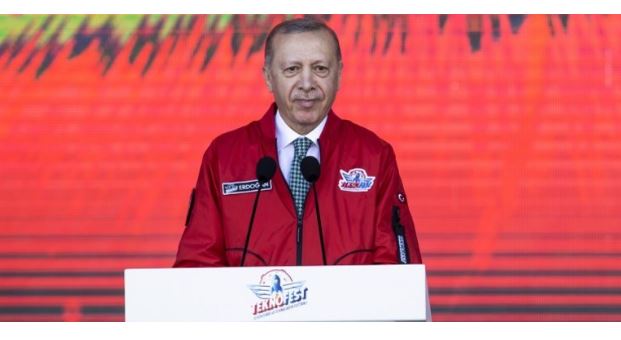 As Turkey and Azerbaijan enjoy strong, deep-rooted relations, the Turkish president on Saturday stressed the two countries’ “strategic alliance” as cemented by last year’s declaration in the wake of Azerbaijan‘s victory in a regional conflict with Armenia.

“We first elevated our relationship with Azerbaijan to a strategic partnership, and last year to a strategic alliance with the Shusha Declaration,” President Recep Tayyip Erdoğan said at leading Turkish aviation, space, and technology festival Teknofest, now held abroad for the first time, in the Azerbaijani capital Baku.

Saying that the two countries have taken bilateral ties to a level that is exemplary not only for the region but also for the entire world, Erdoğan said: “We are organizing Teknofest, the world’s most popular aviation, space and technology festival, in Baku, the pearl of the Caspian, with the slogan of one nation, two states, one festival.”

Just like Turkish Anatolia, just like Turkey itself, Azerbaijan is also our homeland, the Turkish leader added.

“Just as we do not have designs on anyone’s lands or sovereignty, we do not and will not have a single inch of land to lose to people with malicious intent,” he declared.

Raising relations between Turkey and Azerbaijan to the level of an alliance, the declaration was inked in a ceremony attended by the two countries’ presidents in the Azerbaijani city of Shusha, liberated in November 2020 from nearly 30 years of Armenian occupation.

It focuses on defense cooperation and establishing new transportation routes, affirming the two armies’ joint efforts in the face of foreign threats, and the restructuring and modernization of their armed forces.

The declaration decries how Armenia’s groundless allegations against Turkey and attempts to distort history are damaging peace and stability in the region. It also says the opening of the Zangezur corridor, connecting eastern Turkey and Azerbaijan, and the Nakhichevan-Kars railway will further contribute to the strengthening of relations.

Turkey was a key backer of Azerbaijan during the 44-day Nagorno-Karabakh war between Azerbaijan and Armenia, which erupted on Sept. 27, 2020 and ended with a Russian-brokered cease-fire and sizeable Azerbaijani gains on Nov. 10.