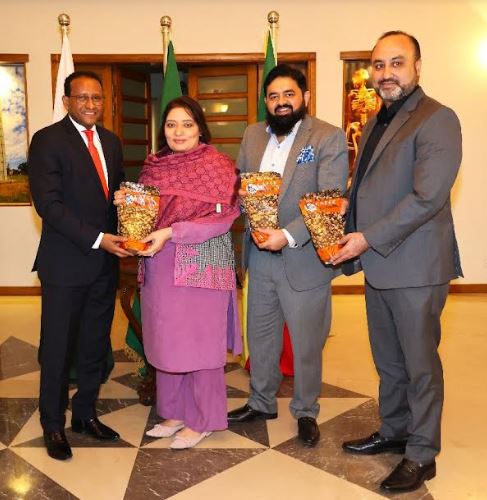 ISLAMABAD, DEC 14 /DNA/ – Ambassador of  Ethiopia to Pakistan Jemal Beker Abdula has said that Ethiopia was looking forward to developing cooperation with Pakistan in the education sector.

He made these remarks during a meeting with a delegation from the education sector led by Special Assistant to the Prime Minister and Minister of State Romina Khurshid Alam. The delegation which includes the University of Sialkot Executive Director Muhammad Rehan Younas and its Chairman Board of Governors Faisal Manzoor, was called on him here at the Embassy of the Federal Democratic Republic of Ethiopia in Islamabad.

“We want our youth to be educated and skillful as our government under the leadership of Prime Minister of Ethiopia H.E. Dr. Abiy Ahmed Ali is fully committed to promoting education in our country,” the ambassador said while requesting the delegation to offer scholarships for the Ethiopian students in their university.

Suggesting the start of the exchange programmes between the two countries, he said it was high time to develop south-south cooperation for the betterment, progress and prosperity of the people living in the southern regions of the world.

University of Sialkot Executive Director Muhammad Rehan Younas extended full assurance to the ambassador in this regard and said his university would look forward to offering scholarships to the Ethiopian students.

He said his institution had been developing a curriculum in consultation with the chambers of commerce to bridge a gap between academia and the industrial sector.

Rehan Younas said the work on establishing an Africa House in Islamabad was also underway which would promote ties between Pakistan and the African countries in diverse sectors including education, business, trade and investment.

The ambassador suggested the delegation to establish an Africa Study Center within the planned Africa House to boost the cooperation between Pakistan and the African countries in the education sector.

He also briefed them about the business, trade and investment opportunities in Ethiopia for Pakistani businessmen. A plan for arranging a visit of a Pakistani business delegation to Ethiopia was underway which would enhance business ties between the two countries by linking business communities of both countries.