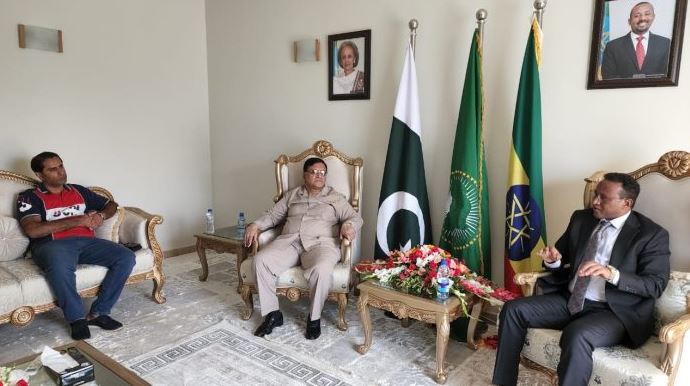 ISLAMABAD, Sep 14: Ambassador of Ethiopia to Pakistan, Jemal Beker Abdula on Wednesday said that there are vast opportunities for economic and trade relations between Pakistan and Ethiopia from which both countries can reap benefits.

He said that Ethiopia is the second largest country in the continent of Africa in terms of population and economy,from which Pakistan can be economically and commercially connected with African countries through trade.

The ambassador said that air connectivity is very important for bilateral trade relations, for which direct air flights between Ethiopia and Pakistan’s commercial city Karachi will start soon.

He said that after Karachi, the series of direct air flights to Ethiopia will also start with Lahore.

Ambassador Jemal Beker said that the national airline of Ethiopia is one of the leading airlines in Africa, which has 110 air destinations, which helps in promoting connections in the top economies of the world.

He said that Ethiopia is a country rich in natural resources in which gold and other minerals are abundant.

The ambassador said that Pakistan is a big potential market and economic and trade relations between the two countries are in the interest of both the countries.

He said that the diplomatic relations between Pakistan and Ethiopia have started afresh and there is a desire on both sides to further increase the mutual relations.

He said that bilateral connections in the business community are very important for the promotion of trade and economic relations in both countries, for which his embassy will fully cooperate with the local business community.

He said that he will give support to the business community and local chambers of commerce from Pakistan for the exchange of delegations and promotion of bilateral relations in both countries and will give full encouragement for such relations.

During the discussion on this occasion, Chairman Pakistan Africa Friendship Association Zafar Bakhtawari said that direct air links between major cities of Pakistan and Ethiopia will boost trade relations and tourism between the two countries.

He said direct air flight in both countries is vital for both emerging economies.

Along with this, he said that the direct air flight is a very important step from both of the countries, which will not only promote the relations between Pakistan and Ethiopia, but also the economic and trade integration of the African region with Pakistan.

He said that the airline of any country has a pivotal role in its economic development and prosperity, such as in the recent past, the airlines of Turkey, United Arab Emirates (UAE), Qatar, Thailand and Singapore have played an important role in economic and trade integration with the rest of the outer world.

Zafar said that with this, these airlines played a very important role in economic linkage and people to people connectivity between these countries .